Reality and Romance at Céline 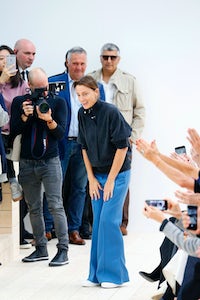 Reality and Romance at Céline

PARIS, France — The artist Dan Graham has always been absorbed by the way people move through their worlds. That makes him something of a soulmate for Phoebe Philo, who has so successfully isolated what it is in fashion that women need to get by. So, when the two of them connected on the Celine catwalk today, it was Kismet.

Philo’s models walked round a pavilion of curved glass created by Graham, hemmed in one side by a wall of metal mesh. The installation suggested a precinct in a city centre, an impression enhanced by a soundtrack of urban noise which soon yielded to the gloriously dulcet tones of Scott Walker.

Reality and romance — that split-personality contrast was an appropriate aural counterpart to the clothes Philo showed. Like the pragmatic pantsuit with a spill of floral chiffon visible at the hem, or the smart topcoat scissored out and twisted at the back. The top of a leather skirt was used as an asymmetrical sorta-corset, just as bits of a jacket were stitched into another skirt.

A similar haphazardness filtered into the whole collection. Easy, fluid, fresh, but also surprisingly urban. Though it’s the styling that shapes how you see a show (here, for instance, the black blazer tucked into white leather pants), it didn’t take much effort to imagine individual items taking on their own life in the real world (the Dan Graham paradigm).

That’s Philo’s achievement: to reach impressive ends with such subtle means. But she also acknowledged fantasy as a significant component in her work. She took it in a pagan direction with the abstract Yves Klein-blue figures imprinted on white sheaths, or the crocheted bra cups. In its own way, the hard little purse was also a kind of fantasy, a Tippi Hedren accessory which would bind the Céline woman to the world, whether she liked it or not.