Clare Waight Keller’s final collection represented a new direction for both the designer — and the house. 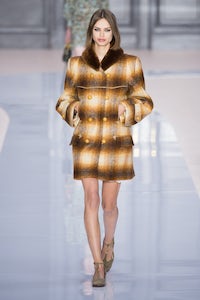 Clare Waight Keller’s final collection represented a new direction for both the designer — and the house.

PARIS, France — You couldn’t help but wonder what must have been going through Marianne Faithfull’s head on Thursday morning as she sat in the front row at Chloe while dozens of versions of her much younger self paraded past in front of her.

For her final show for the house, Clare Waight Keller offered up a perfect late-60s pop bird: short skirts and pinafore dresses, blouses bowed at the neck with billowing sleeves, and prints that borrowed psychedelia’s swirling paisley and floral patterns (though not the palette). And what better shoes than Mary Janes to anchor the look?

Waight Keller said she’d actually started with Yellow Submarine the Beatles’ cartoon from 1968 that offers chapter and verse on chemically assisted visuals. “I liked the way one world morphed into another in that film, and I wanted to go somewhere else with this collection.” If you looked hard, you could see that “somewhere else” in the prints: mushrooms, caterpillars, opium poppies, subtle hints of Alice’s proto-psychedelic Wonderland to complement the sweetness of the dresses.

The girls felt like the innocent little sisters — or maybe the younger selves — of the women Waight Keller has been celebrating during her time at Chloe.

But then there was the other Chloe girl, more knowing and worldly, in her baggy hipslung trousers, blurry plaid lumberjack shirt, shearling and suede tracksuit. “I touched on elements I’ve always worked on — the sheer flous, the soft volumes — but I wanted to bring in sportiness and menswear references in a new context,” Waight Keller clarified.

“It was interesting to feel I wasn't just resting on what I’d already done.” Interesting, too, that for her Chloe sign-off, Waight Keller should feel inspired to take off in a different direction. Again, you couldn’t help but wonder: where's she headed to at the other end of that rabbit hole?