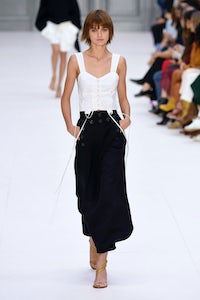 PARIS, France — Clare Waight Keller moved back to London a month ago and it might be the best thing that could happen for her at Chloe. Now that she’s splitting her time between London and Paris, she feels she has a new clarity about her job.

London’s energy was already refuelling her creativity in the collection she showed on Thursday morning. It was more urban, more defined. The floaty, plissé-ed and/or tiered flower child dresses that are quintessential Chloé were still on display, some in Marimekko-like florals to underscore their 1970s provenance, but there were also softly tailored gamine pantsuits and striped dungarees to add some spine.

Waight Keller said that spending more time away from Paris helped her define Chloé’s essence, its Frenchness. She’d isolated a particular combination of sexy and innocent as significant. So the show’s first look was a statement of intent: a virginal white cotton top, laced, with a suggestion of corseting, paired with high-waisted navy pants buttoned sailor-style.

That nautical notion followed through with sailor collars, Breton stripes, and the rope ties from which smock silhouettes flowed, while the sexy/innocent conversation carried on in the peekaboo ties on shorts and tops. Purest white it may have been, but a sheer white scarf-pointed dress, buttoned down both sides, defied innocence. It was sweet, but knowing. 10cc’s I’m Not in Love played on the soundtrack, the sweetest-sounding, most cynical song in the English pop canon. Now that would be a juicy direction for Waight Keller to explore.