At Erdem, A Family Tree in Fabric

Erdem’s collection possessed a tension as delicious as that found in any thriller set in the famously mysterious city. 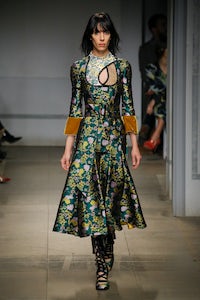 At Erdem, A Family Tree in Fabric

Erdem’s collection possessed a tension as delicious as that found in any thriller set in the famously mysterious city.

LONDON, United Kingdom — Istanbul, formerly Constantinople, the city where West meets East, has long been a word that is shorthand for mystery and intrigue. And so it was for Erdem with his new collection.

He was imagining a meeting of his great-grandmothers, English on his mother’s side, Turkish on his father’s, women he knew almost nothing about, in the context of L’Immortelle, a dream-like French movie from 1963 which attempted to make no sense whatsoever of Istanbul’s enigmatic nature. And the clothes Erdem designed were equally hard to pin down, a shimmering fashion mirage with traditional English florals and Ottoman miniatures mixed in hallucinatory layers on panne silk, like a Moralioglu family tree in fabric. Erin O’Connor wore a magnificent coat and vest which combined the uniform of a Royal Scots guardsman (another Erdem ancestor) and a Sultan’s embroidered finery.

Erdem did a wonderful job of communicating the unknowability at the heart of the collection. Even the colour palette was mysterious, with strange, saturated violets and mustards dominating. The fluidity of bias cutting made for soft, slinky silhouettes. These femmes were slightly on the fatale side, none more so than Jamie Bochert in midnight velvet trickling with sequins and bursts of beading.

Despite such vampish effects, Erdem insisted it was lightness he was after, more than anything else. From the Turkish side of the family tree, white cotton leavened the embroidered wools. “I wanted the collection to feel optimistic,” he said.

In the past, Erdem’s most evocative collections have been attached to an intense narrative, often revolving around women on the verge of a nervous breakdown. There was none of that here. But the sense of personal discovery — or, at least, of imagining what might have been — created a tension as delicious as that to be found in any Istanbul-set thriller.