​A Spiritual Path at Givenchy

Riccardo Tisci’s new emphasis on the spiritual rather than the carnal not only changed the shape of Givenchy but also the attitude. 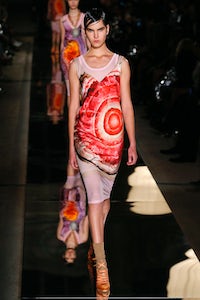 ​A Spiritual Path at Givenchy

Riccardo Tisci’s new emphasis on the spiritual rather than the carnal not only changed the shape of Givenchy but also the attitude.

PARIS, France — Riccardo Tisci’s journey to the centre of his mind continued on Sunday night, as he moved on from last season’s Pharaonic psychedelia to delve into primordial nature, equally trippy in its own way. But where Ancient Egypt inspired Art Deco angles and spikes, Mother Earth had more to do with lightness, fluidity, organic forms which caressed the body, rather than stitching it into shape.

It felt like there was a generosity of spirit in the clothes too, which extended to the fact that it didn’t rain. The show was outside, in the impressively vast centre court of the Jardin des Plantes, but a cloudburst was never in the equation for Tisci. He said the elements have always been kind to him.

They were again on Sunday, with the natural world contributing the collection’s most seductive effects. Geode prints and pendants set the mood, with the kind of cosmic colour scheme you can only find in mineral deposits buried at the heart of the planet. There were cool shades of sand, hot shades of sun (rise and set), bias patterning like wind ruffling dunes, interspersed with rigorous suiting where zips provided the decoration.

One particularly gorgeous group of dresses looked inspired by the neo-psychedelia of LA artist Fred Tomaselli. Another featured playful gossamer layers of polka dots and stripes, decorated with fly-away tatters of chiffon. It was… er… what’s the word?...life-affirming, in keeping with Tisci’s new emphasis on the spiritual rather than the carnal. Not only changing the shape but changing the attitude, he said afterwards. Ever the optimist, his faith that it’s more of a woman’s world than ever compelled him to connect his clothes to nature, two life forces meeting as one. It was pretty impressive, particularly as the last looks, inky, slinky black, walked away into the darkness, their decorative patterns of crystal flowers twinkling like stars.

As for his own spiritual path? “I’m working on it,” Tisci said, with a wry smile.