Chitose Abe has established an aesthetic that combines romance and hard edges, intelligence and eroticism in a way so unique and ingenious that it constitutes one of the most distinctive design signatures in contemporary fashion. 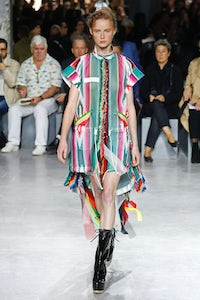 Chitose Abe has established an aesthetic that combines romance and hard edges, intelligence and eroticism in a way so unique and ingenious that it constitutes one of the most distinctive design signatures in contemporary fashion.

PARIS, France — The ethos of Japanese fashion is so free, so untroubled by reason or chronology that it’s easy to imagine it will be a challenge for historians in the distant future. Who were these creatures?, they’ll wonder, as they contemplate Comme or Issey or any of Harajuku’s children of Pop, collating and digesting lifestyles, philosophies, modes of dress, and unleashing their own hybrid reconceptualisations on the world.

The collection that Chitose Abe showed for Sacai on Monday morning distilled the lives of ten or so “game changers” (that’s what she called them) into a succinct biography in fabric. But it wasn’t their lives so much as iconic images, the photos you remember, that she drew on: Kurt Cobain in a ratty leopard fake fur or mohair sweater, Pablo Picasso in Breton stripes, Jimi Hendrix in a regimental jacket, Joe Strummer in white denim and camo, circa late-period Clash.

That is, after all, how we experience our icons now, but it was Chitose’s particular fetishistic Japanese genius to recognize that notion and take it on board as inspiration for a collection of clothes.

And such clothes! Every look was an ingenious all-in-one, built on the central model of the classic Mod parka (the eternally Anglophiliac Japanese fashion pack has an undying affection for youth cults we have known and loved, from dandies to Teds to Mods, Glam rockers, punks and beyond), lowslung with a distinctive fishtail.

So Picasso’s signature sailor stripe and shorts appeared as a single piece. Likewise Hendrix’s distinctive frogged jacket, with his silk scarves reconfigured as the dress underneath. Sacai acquired and dyed thousands of vintage scarves to complete the look. That thoroughness is something else that distinguishes the Japanese. Here, for instance, Chitose reproduced the exact Daniel Johnston t-shirt in which Kurt Cobain was photographed, then buried it under her version of his mohair sweater, amplified into a big, swinging coat. But if that was literal, the translation of Joe Strummer’s kafiya scarves into embroidered organza beauty wasn’t. Nor was the re-imagination of his tiger-stripe camo as equally beautiful lace.

You could subject every outfit to scrutiny and come up with something rich and strange. One of Chitose’s gamechangers was Prince Charles. His boxer shorts were trimmed in lace to form the underpinnings of Savile Row classics dissected and reassembled. His bowtie was a scarf. Jane Birkin and Serge Gainsbourg and John Lennon were here too… obviously, it’s easy to go on and on.

Ultimately, the most significant point to make about the collection is that it wasn’t essential to understand and appreciate its starting point. The clothes stood on their own, because  Chitose Abe has established an aesthetic that combines romance and hard edges, intelligence and eroticism in a way so unique and ingenious that it constitutes one of the most distinctive design signatures in contemporary fashion. And kudos to Michel Gaubert for an aural collage which kept pace with her clothes every step of the way.