Anthony Vaccarello raised the bar high for himself, building a fearless nocturnal wardrobe that made the familiar seem alien. 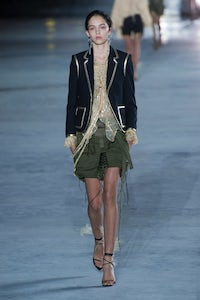 Anthony Vaccarello raised the bar high for himself, building a fearless nocturnal wardrobe that made the familiar seem alien.

PARIS, France — “L’amour fou, l’amour de deux fous,” was how Pierre Bergé described his lifelong relationship with Yves Saint Laurent. The quote was reproduced and left on the seat of every guest for Tuesday night’s Saint Laurent spectacle. The mad love of two madmen…. Anthony Vaccarello raised the bar high for himself. He doesn’t seem remotely mad at all. Possibly a little on the moody side, but he’s so slight and soft-spoken that you can barely conceive of how, why and where he magics up the Amazons that rule his world.

Mind you, YSL himself dug deep down inside to find similar specimens, so there’s an innate compatibility there. When Vaccarello did it again on Tuesday, that compatibility took on darker shades. He wanted to show a consummate Parisienne (this, on the same day that Maria Grazia Chiuri had a similar challenge on her plate at Dior) “who enjoyed her city, who enjoyed fun” and, he eventually conceded, “who enjoyed darkness”. As in, a wild night out. That was what a Vaccarello woman has always seemed best-equipped for. He built her new nocturnal wardrobe on shorts, a flowing top — poet’s sleeves and a long tail — and lethal heels, winged, if you so desired, like a female Mercury. There was the lustrous, clotted shine of beaded blazers, and the lamé sheen of abbreviated onesies with feathered thigh-highs, and, later, tattered lace, more poetry in motion. Then a modern bride, wrapped in an abbreviated meringue of ivory silk. That was Look 53, at which point the show felt like it might have reached a natural conclusion.

Not so. There followed a parade of couture silhouettes, exploded to surreal dimensions, huge black flounces, like life-preservers made of silk, entire aviaries denuded to form feathery clouds. It was a showgirl extravaganza and, like all extravaganzas, it would have eventually collapsed into repetition if it wasn’t for Vaccarello’s peculiar knack for making the familiar seem alien. There was a glittery monomania at work, fearless and fuck-you if you didn’t get it. And that might be Vaccarello’s own seductive madness.