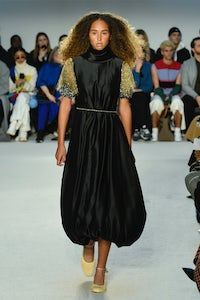 LONDON, United Kingdom — Did Jonathan Anderson really utter the words “antique celluloid” when he was describing the gorgeous frosting that was such a feature of his new collection? If it was just my imagination running away with me, I’m happy to go there. The micro-shreds of celluloid that dressed the sleeves and shoulders of Anderson’s coats and dresses created a diffuse, glittery, fantastical effect, the kind of outlandish, surreal flourish that makes his clothes so unique. That wasn’t all. He himself was partial to a triptych of looks that came towards the end of the show: ruffled collar, maxi-ruffled pants paired, first, with a black leather vest exploding into godets, next, with a tunic of golden dragon’s scales, finally, with an asymmetric top of ruffled ice-pink leather. Made no sense whatsoever. Looked fabulous.

As usual, exaggeration was his friend. Anderson said he imagined how models have to walk into a space filled with strangers, “snaking through a forest of people”, claiming that space. The same notion could apply to any of us in an inhospitable world. Fashion’s favourite lipservice may well be this, “You wear the look, the look doesn’t wear you”, but there was sheer joy in Anderson’s experiments in form and land. Yes, that look will wear you into a future peopled with strangers, frosted with glittering antique celluloid.

Anderson has always been a playful designer. There have been times when his clothes looked like toys, like the draped gold cloth situation here that seemed to celebrate the brewsky. He said it stemmed from his obsession with the old Guinness ad that featured white horses coursing through foaming surf. The typography and the colours of a Guinness can appealed to him, he imagined the way it looked when it was crushed. Yes, Anderson said that. And then he made a surreally luxe fashion statement from it.

Equally, he created gorgeously subdued sweater dresses, shoulders draped in a contrast knit capelet, or a long knit column with a ruffled hem. Or a starkly elegant tuxedo, lapels extended to create the exaggerated portrait collar effect seen elsewhere. The dialogue between restraint and excess is a major Anderson signature. It feels like an appeal to the most fundamental appetite for fashion. If you find yourself seduced by such notion, this designer will amply reward your loyalty. It was all here, plain as the frosting on a cake.