The designer's bright and Balearic collection was a measure of his maturation with hints of the leisurely sensuality he brings to Loewe. 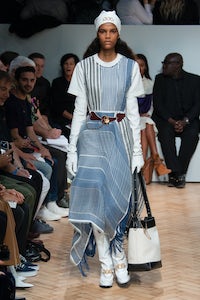 The designer's bright and Balearic collection was a measure of his maturation with hints of the leisurely sensuality he brings to Loewe.

LONDON, United Kingdom — There was apparently a moment when the staging of Jonathan Anderson’s latest show was going to be quite dark and Gothic. All that remained of that idea were glossy black railings, arranged around the room in screen-like formations. Just as well minds changed (if indeed they were ever inclined to gloom), because there was nothing remotely dark about the airy, beautiful collection Anderson showed.

Perhaps Anderson was projecting his more arcane inclinations into this single piece of set-dressing. Or, as he put it, “[Benglis] went so far in terms of putting herself out there as a woman that I wondered what is the equivalent in fashion. How do you push yourself that far? I wanted to take another avenue to re-invent the idea of re-invention.”

Again, this would once have been an open invitation for Anderson to entertain himself with a little light audience bemusement. But his new collection was a measure of his maturing as a designer. Re-invention coloured by consolidation. He conceded as much when he referred to the evolution of his customer. “As I get older, that character has to evolve with me.” If it’s her wants and needs that are directing Anderson’s work, then all power to her

One thing his Loewe stint has gifted him with is an appreciation of leisurely sensuality. I doubt there’ll be a more suitable Spring/Summer collection shown in London this season. Anderson’s love of Ibiza is in his blood. The stripes, the bib fronts, the swathes of crochet, the broderie anglaise fichu looked fresh and bright and Balearic. The lightness was emphasised by papery fabrics, clingy knits and pale patch-worked pyjamas. The natural movement of sinuous, scarf-pointed dresses and skirts was accentuated with flurries of fringe. Sleeves drifted south, cuffs unbuttoned.

In fact, “unbuttoned” defined the free, easy essence of the collection. There were some serious kinky boots (there will never not be a fetishistic edge to a Jonathan Anderson collection), but many of the models walked in the fruits of his Converse collab. A new song by Robyn on the soundtrack underscored the key principles: light, energy and joy, plain and simple.