There was a pleasing randomness to it all, like the people wearing the clothes were aware of civilization only in the most random way. It was Anderson to a T — and he did himself proud. 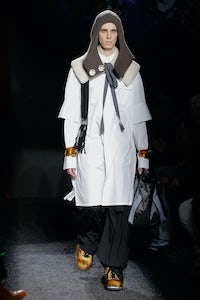 There was a pleasing randomness to it all, like the people wearing the clothes were aware of civilization only in the most random way. It was Anderson to a T — and he did himself proud.

PARIS, France — Jonathan Anderson has absolutely no interest in making life easy for the professionals who sit through his shows trying to fillet out the significance of the polyglot presentations he offers up in the name of fashion. You can take a few things for granted. He’s ardent about art and artisanship. He doesn’t see why anything has to be the way it is, so nothing matches. And he’s a pagan, in spirit at least. “The Jezebel Spirit” by David Byrne and Brian Eno was on the soundtrack. She is, according to fundamentalists, the most cunning and seductive spirit in Hell’s hierarchy. Respect!

Paris meant a couple of firsts for Anderson: not only the first time he’d showed his own collection in the city, but also the first time he’d showed his men’s and womenswear together. And wouldn’t you just know it would be a space that was once the studio of André Breton, king of the Surrealists. A surrealist streak runs deep and strong in Anderson. In a space floored with black sand and hung with huge plastic Planet Earths, he showed clothes that defied time and place in their peculiar, serene beauty. It’s kind of the joy of what he does. Surrender to it and create your own story.

He mentioned the work of artist Paul Thek that had been an inspiration for an earlier collection. “Romantic and sinister, ”he called it. There was much of those qualities in his own designs, starting with the cultish hood every model wore. It established a sense of community, but the community I imagined was cut off from the world, maybe by the sea (the men wore elasticated britches that reminded me of fisherfolk).

There was something peasant-y about the long tunics in knit and cotton, the wide-striped tops, the shearling tippets. A long floral dress topped with an oversized herringbone coat, layers of asymmetric knits, a long shapeless lurex dress cinched with a drawstring…there was a pleasing randomness to it all, like the people wearing the clothes were aware of civilization only in the most random way. Hence animal-print shoes and stockings that never matched. Then there were the chunky Bronze Age bracelets, the forest of fringe, or a swirl of bias-cut dress to bring you up short. It wasn’t quite what you’d imagined at first. There was a sly sophistication at work. That's Anderson to a T — and he did himself proud.