For Yeezy Season 3, Kanye West made the statement of the season before it's even really underway. 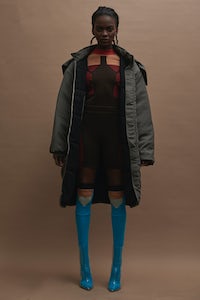 For Yeezy Season 3, Kanye West made the statement of the season before it's even really underway.

NEW YORK, United States — Time is fashion’s currency. The industry wheels and deals in time to the rhythm of its own increasingly frantic calendar. In his epic spectacle in Madison Square Garden on Thursday afternoon, Kanye West, one of fashion’s most ardent recruits, made a kind of history, the kind he likes, where he reshapes everything according to his own diktats. He stopped time. Not simply because his artist collaborator Vanessa Beecroft made his cast of thousands — I hesitate to call them models — stand more or less stock still on the floor of the arena for well over an hour, but also because the show itself prompted reflection on what is going on right now in the world outside fashion, in America’s streets, in the Middle East’s refugee camps and the Mediterranean’s migrant diaspora, at the exact same moment that twenty thousand people are sitting in a sports arena in Manhattan, looking at clothes, listening to music.

Because the event was two-fold. Two launches: Yeezy Season 3, West’s latest collaboration with Adidas, and the unveiling of his new album T.L.O.P, (The Life of Pablo), played in its entirety while West’s tribe stood motionless — truly a captive audience. (If the album cover isn’t giving much away, it still seems safe to assume that “Pablo” is Picasso, who has already appeared in the pantheon of maverick geniuses with which West has aligned himself.)

He sold tickets, thousands and thousands of them at $50 to $135 a pop. They were all gone within ten minutes. But you can’t expect people to pay that much money to sit and listen to an album. You gotta give them a show. That would seem like a logical incentive for what we experienced. Given the scale of the venue, a conventional fashion presentation would have been lost. And also, the clothes that Kanye is making with Adidas are an evolutionary sportswear proposition. There was more colour than before, and a new graphic element that emphasised the articulation of the garments, but his formula for women remained secondskin athleticism, with oversize outerwear (desirable, that). For men, it was the same supersized idea, topical (the presence of Vetements’ Demna Gvasalia helped underscore that point) but not necessarily the kind of stuff that would play to the peanut gallery at Madison Square Garden. About as “fashion-y” as the presentation got was the appearance at one point of black fashion icons Naomi Campbell, Veronica Webb, Liya Kebede and Alek Wek — each in body-stockings and big fur coats.

Still, there was more to Kanye going big than just that. His obsessive need to communicate often makes him turn his stages into soapboxes. When he’s in the live moment, his thoughts pour forth in an unmediated verbal stream that sometimes gets him into trouble. When he’s in the studio, on the other hand, there is an equally prodigious outpouring, but it is shaped and disciplined by West’s sonic wizardry, his genius. T.L.O.P. sounded magnificent, symphonic but savage, tempered by odd moments of sweetness and humour. There was even a short track that seemed to poke fun at his notorious self-regard: “I used to love Kanye, I miss the old Kanye, I miss the soul Kanye.” The point is, every bit of West’s music says something. His show on Thursday played out like his effort to make his clothes say something too.

It felt a little bit like the third part in a trilogy: Beyonce’s half-time performance at the SuperBowl, Hedi Slimane’s Saint Laurent show in LA on Wednesday night, now this — all of them efforts to provocatively re-contextualise the familiar, to make something personally meaningful out of media spectacles. West rejected any suggestion of weighty socio-political statements after last season’s presentation with Beecroft, but the images from his new one spoke for themselves. While the huge beats banged through the arena like gunshots or bombs, some of his tribe raised clenched fists, the Black Power salute. The kids wearing the new collection were elevated on two platforms above the hundreds of others in desert-toned clothes from older seasons, but as the hour wore on, the population on the platforms became more and more porous. They started to look like rafts, floating in a sea of people, a ragged lost tribe for whom there was no room. Above them were poised the Jenner/Kardashian klan, glittering in white shiny outfits from the Yeezy x Balmain collab, and fuzzy in huge Yeezy shearlings. There could not have been a more graphic statement about haves and have-nots in an increasingly polarised society. And it’s not an image that is likely to be repeated in any other fashion show any time soon. So, whether he meant to or not, Kanye West did it. Stopped time, froze this melancholy moment forever.

Editors Note: This article was revised on 12 February 2016. A previous version of this article misstated that the Kardashian-Jenner family wore Yeezy x Balmain outfits. This is incorrect. The shearling coats worn by the family are not part of the Yeezy x Balmain collection, and were in fact created for the Yeezy brand by Katie Eary. 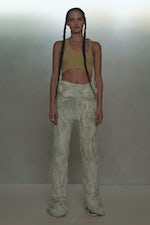 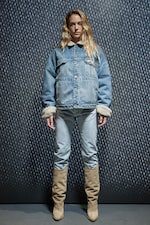 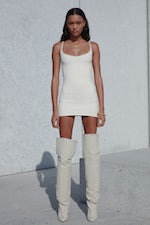