In his debut, Felipe Oliveira Baptista beautifully evoked the shapes, the colours and the art of Kenzo Takada. 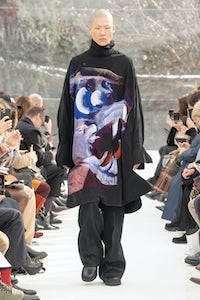 In his debut, Felipe Oliveira Baptista beautifully evoked the shapes, the colours and the art of Kenzo Takada.

PARIS, France — God smiled on Kenzo on Wednesday morning. Squalls of heavy rain have been blowing in and out of Paris, but it was all blue sky for Felipe Oliveira Baptista’s debut at the brand. And then, minutes after the show was over, the black clouds rolled in again.

From the time he launched his business in 1970, Kenzo Takada brought the sunshine. Since his retirement in 1999, he’s seen a handful of designers come and go at the business he built, attempting to keep the magic alive, and, now 80 years old (and looking so good on it, I’ll have whatever he’s having), he was in the front row on Wednesday to watch Baptista’s effort. Oh, to be inside his head. I thought the new arrival did a wonderful job of capturing the joy of Kenzo through the 70s and 80s, when he was life itself on the Paris scene, when his shows were colourful circuses of models running, jumping – and, rarely, standing still. Now, the movement was in the clothes – models don’t run around much anymore – but Baptista beautifully evoked the shapes, the colours, the art of Kenzo.

He called his collection “Going Places.” One change he’d made was taking “Paris” off the logo. He said he wanted something “universal.” Baptista also wanted the sense of a journey, from past to future. He pointed out that both Kenzo and he were from islands (Kenzo Japan, Baptista the Portuguese Azores). They’d both had to travel to make something of themselves. So there was a shared nomadic something or other in Baptista’s flowing djellaba-like volumes and matching hoods. Reversible pieces, interchangeable pieces (gender-free, a lot of them) and transformative pieces (down jackets turning into sleeping bags, for instance) underscored the versatility a nomad needs. Kenzo was the first designer in Paris to show deconstructed clothes. Here, the tailoring was impressively soft, elongated in layers.

“What everyone loved about Kenzo’s clothes is that they were flamboyant but effortless,” said Baptista. “The purity and drama is true to him.” Flamboyance wasn’t a signature of his own brand, which he closed in 2010 to join Lacoste, where extravagance also wasn’t on the mood board. But, just as he created a wildly successful hybrid of high-performance sportswear and his own inclinations at Lacoste, he came to Kenzo with an open mind about its boldest signatures: print and colour.

Kenzo was famous for his florals. Baptista made a camo print of flowers, cut it into oversize pieces with a military edge, restrained by zips, released by them. Same with long, floating dresses, with spiralling zips to change the silhouette. The focus was always movement. And, for the collection’s graphic theme, Baptista borrowed from the work of Julio Pomar, considered one of the greatest Portuguese painters of the 20th century. Pomar painted tigers, and they were ferociously abstracted all over t-shirt dresses and elongated knits.

The set was a network of transparent tunnels laid out around an ornamental garden, with fountains playing. The kind of situation you might imagine people needing in the future if the rain comes for good, as it seems to have in the UK. Baptista said the set looked just as good in a downpour as it did in the sunlight. Something else he shared with Kenzo – boundless optimism.