With elements of an Asian drama, the collection's grown up but youthful spirit still spelled progress for the brand. 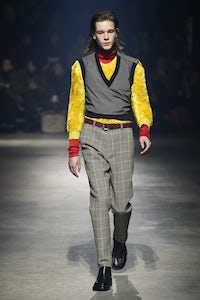 With elements of an Asian drama, the collection's grown up but youthful spirit still spelled progress for the brand.

PARIS, France — Humberto Leon and Carol Lim deserve kudos for today’s Kenzo show. Although it was the last show on the schedule, quite long and at a far end of town, at the end of a gloomy day, it proved to be a rather enjoyable experience.

Models — both men and women — strode amidst a cinema set, where a real movie "My Sister's Wedding" was being filmed. It was an autobiographic affair, and it ended with a lovely dance scene. The fashion content and the cinematic extravaganza actually mingled well.

The collection took elements of the Asian drama that the actors were performing and that gave the proceedings a glowy, glittery, kitschy feel. It felt fresh. The menswear was a bit disco, complete with a couple of glittery outfits, while womenswear was ornate and frivolous, much in the vein of Miu Miu. All in all, it spelled progress for Kenzo: the collection looked grown up but still youthful, and that could be an interesting route to explore in the future.