The collection was a step forward for Bruno Sialelli. Not a decisive one, but there were signs of the designer’s emerging handwriting. 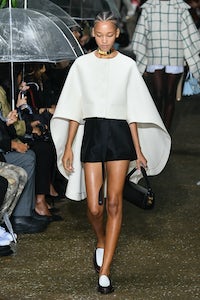 The collection was a step forward for Bruno Sialelli. Not a decisive one, but there were signs of the designer’s emerging handwriting.

PARIS, France — Today’s Lanvin show was a bit of a malfunction. The idea of staging it en plein air in late September, with weather forecasts signaling rain was a bit risky. Too risky, in fact. It was literally pouring as models strode through the plant-filled alleys of the garden surrounding the Musée du Quai Branly, making the whole experience slightly annoying. That said, guests were given headphones, so that each one could watch the show in his or her own bubble, which was surprisingly uplifting — no small talk or gossip with one’s neighbors, thank goodness. And despite the snafus, the sight of Lanvin creative director Bruno Sialelli barely making his way for a final bow through a crowd eager to leave the venue as soon as possible made me cringe. No matter what, some respect is due.

The collection itself was a small step forward for Sialelli. Not a decisive one but still. Sialelli worked at Loewe, and that you can still see clearly in many aspects of the new Lanvin he is nurturing: the odd hats, dangling hemlines, textural bags and vaguely or abstractly ethnic shoes all owe a debt to his former employer, and it will take more time to iron these out. But perhaps not too long, honestly: Sialelli has his own handwriting, emerging in the form of a languid sense of elegance mixed with a soigné childishness. The bias cut dresses, pajama striped combat wear and the oddly proportioned tailoring were exquisite, as was the psychedelic ladylike ensemble which opened the show. In other words: there is room for improvement and Sialelli has what it takes to do just that.