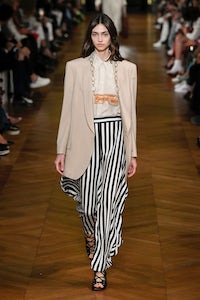 PARIS, France — “It’s a time for facts,” said Stella McCartney after her show, which is why every seat in her usual show space in the Opera Garnier contained a large square sheet that detailed “what we stand for, what we’ve done from day one, and what we continue to do.” Sustainable viscose, regenerated cashmere and nylon, the glueless sneaker sole…these are goals achieved in the past few years.

Stella called her first collection under the umbrella of LVMH her most sustainable ever in terms of the materials used. “I want everyone to go, ‘WOW! That’s an amazing fashion show,’ and then go home and read the document.” So, in the interests of that result, she pushed things a little. The gilded walls of Opera Garnier’s salons were memorably covered with videos of animals vigorously mating. Life, at its most primal, with a suitably raunchy soundtrack to match.

The collection itself didn’t quite go there, though there was a sensuality that infused even the more tailored pieces. But maybe there was less of that structured part of Stella’s past than usual. Instead, the heart of the collection was long, flowing dresses, often backless, in summery florals or sheer lace. She added a scalloped motif on sleeves and hems to create a fluttery silhouette, and ties and laces that floated around the body. Even her menswear fell under the spell. It was as easy as pajamas.

Stella has always been a pragmatist about her work. She knows that desirability has to come before worthiness. But, at the same time, she has always been fierce in her challenge to the industry. “The media has a massive responsibility,” she said. “The awareness is being driven by kids but we can’t wait for them to grow up and be in a position to take charge.”

In her new role as adviser to LVMH CEO Bernard Arnault, she already faces one hurdle. Last week, he described Greta Thunberg as “demoralising for young people,” when she has clearly mobilised them in their millions. At the same time, some old French intellectuals were decrying Thunberg as “not sexy” like the Swedish girls they vaguely remembered from their distant pasts. If it feels like battle lines are being drawn, Stella McCartney may have positioned herself as a Trojan horse, in fashion at least.