While Lauren is an expert at selling a certain dream, communicating his message now requires more subtlety. 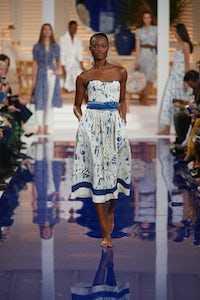 While Lauren is an expert at selling a certain dream, communicating his message now requires more subtlety.

NEW YORK, United States — Ralph Lauren is a never-ending story of a certain lifestyle, and Jamaica, where the designer owns a home in Montego Bay, is a significant chapter in the narrative. (Bedroom suites at Round Hill, the upscale resort near his property, have long been outfitted in Ralph Lauren homewares, allowing fans not only to wear his preppy fantasy, but sleep in it too.)

Lauren’s Spring/Summer 2018 collection — that’s right, he’s still doing in-season shows — was an homage to the island. He cut silk streamers in the colours of the flag on a bias and stitched them together to create a strapless column gown, painted a cruise ship motif onto a double-breasted leather blazer and worked yacht or swim-inspired details into nearly every piece. (For instance, a blindingly yellow halter-neck silk gown was accented across the shoulder blades with the nylon utility straps one typically finds on a flotation device.)

There was plenty of full-on resort wear here: an acid denim mini dress dégradéd into a fringe of feathers for dinner out, Shibori-printed cotton sundresses wrapped up at the waist with washed-out blue bandanas for day. Some of the most direct references were charming, like the navy-and-white nautical rope holding up a one-shouldered linen dress, or the intarsia-ed bathing beauty on a wide-gauge knit jumper. Still, while Lauren is an expert at selling a certain dream — and making a woman’s shoulders look fantastic — communicating his message now requires more subtlety. The dream isn’t dead, but it is changed. In order for Lauren to move forward, he must let go of his Captain Obvious tendencies.