The collection's spontaneous touches perfectly embodied RDVK’s own infatuation with the romance of fashion. 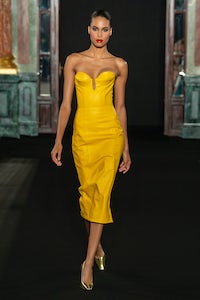 The collection's spontaneous touches perfectly embodied RDVK’s own infatuation with the romance of fashion.

PARIS, France — “I don’t fit with anything,” Ronald Van Der Kemp mused before his third ever couture show. His backstage swarmed with impossibly tall models in hairstyles inspired variously by Sigourney Weaver and Queen Beatrix of RDVK’s homeland Holland, alongside other women in Bladerunner makeup. The awkward collision of worlds is an RDVK specialty. He’d designed 50 pieces for his new collection and he waited till the last minute to put them together, to make 35 looks.

“What I make, I use,” he said matter-of-factly. “I use what goes wrong.” I needed an example, so he pointed to the supporting framework for a skirt he’d designed with an enlarged Kim Kardashian butt. He’d decided he didn’t like the skirt but he fancied the framework. So it became the skirt, over a pencil-ly underthing. He paired it with a jacket in Tyvek, lined in silk, waistbanded in patent leather and buckled like a straitjacket. Kinky. Same way he likes Helmut Newton’s photographs. “The woman is always in charge, subject not object.”

Tyvek is paper, and paper was the inspiration for RDVK’s new collection, in keeping with his commitment to sustainability. It’s both point of principle and simple economic sense for a still fledgling business. He said he’d been thinking about paper dresses in the 60s (the Warhol soup-can dress possibly the most famous). “But I wanted to turn those dresses into couture.”

Giving value to the lost, the forgotten, the discarded has been RDVK’s ethos from the start. Here, it was manifest in a pair of paper jeans, extravagantly gilded. Or a second-skin strapless dress moulded from rubber. Or the empire-line evening gown cut from a bolt of toile de jouy that he found in a vintage shop in Williamsburg. Or, most sensational of all, a hooded column gown (Alaïa-like) which he’d carved from a lustrous orange jersey, more often used in interiors, and lined with purple duchesse satin.

“Everyone’s pretending they’re not throwing stuff away,” RDVK said dismissively. Whatever, it works for him. He picks up the pieces. And that glossed this collection’s futuristic edge. He mentioned Cardin. Like the lurid green ruffles of a fake organza from “an old couturier’s old stock." Ronald loves a ruffle. They were everywhere as an airy concession to the spirit of couture. Also airy, the billowing gown that dashed down the catwalk towards the end of the show, a black ribbon tied high on the model’s thigh. It felt like a spontaneous touch that also perfectly embodied RDVK’s own infatuation with the romance of fashion.

He is, after all, the couturier who can parade an ice-cool, side-slit, spaghetti-strap-strung column of black one minute, and a cropped military shirt in navy silk funkily matched to a hipslung patchwork of plaid and denim the next. Life’s rich tapestry…