LONDON, United Kingdom — On Tuesday afternoon, show-goers filled the space at 180 the Strand for Richard Quinn's debut runway collection — London Fashion Week's closing act. Only minutes before the first model Jean Campbell walked out onto the runway, Queen Elizabeth made a surprise appearance, leaving influential editors, designers and especially Quinn's mother, Eileen, in awe, as Her Majesty sat down next to American Vogue editor Anna Wintour.

The silk headscarves that ran throughout the extraordinary collection were a gentle nod to those of the Queen, who has slowly developed into an unlikely style icon (it is said she was the first royal to wear trousers). "I only found out about [Her Majesty's attendance] a few days ago," said Quinn, who, as a result, added additional floral headwear to the show.

As for the couture-inspired collection, it too was extraordinary and memorable. From foil gowns with matching thigh-high boots, to snakeskin-textured mini dresses paired with motorcycle helmets, to an abundance of textile-clashing floral dresses, the Central Saint Martins graduate — who founded his namesake label in 2016 — impressed by showing a full-wardrobe that told a consistent story across categories, a craft which designers only often master a few seasons in.

"It was absolutely overwhelming, and we are so proud of Richard, he has worked so hard," said Eileen Quinn post-show. But the surprises were not over just yet. Following the finale, where models walked to an emotional soundtrack by Sufjan Stevens, causing a tear here and there, the 91-year-old royal presented Quinn with the inaugural Queen Elizabeth II Award for British design — an annual prize for an emerging British fashion designer who shows exceptional talent and originality while demonstrating value to the community and strong sustainable policies.

There is something brewing in London, a feeling of anticipation that, at large, has been absent since the mid-2000s when the city last saw a collective of exciting new talent rise (now more established names such as J.W. Anderson, Christopher Kane and Roksanda Ilincic). A new flock of young womenswear labels proved that London's emerging fashion scene, which became synonymous with innovative, boundary-pushing design, has regained its footing. Binding many of this season's designers is the urge for escapism: spanning the past and future, in faraway places, all of which offer a sense of relief from reality — a fitting feeling in today's age of political and social unrest. 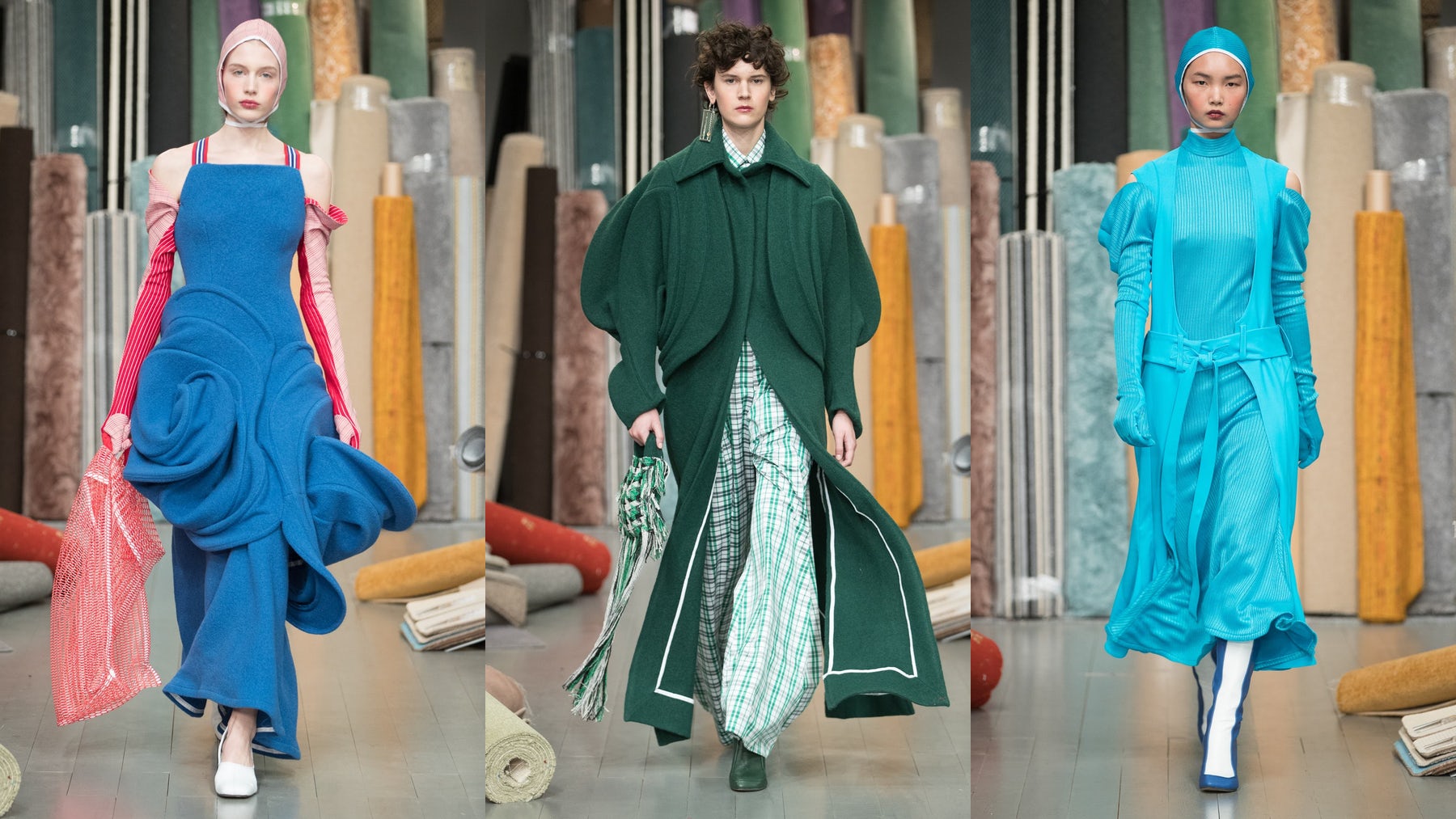 View Collection
"It's been a creative and inspiring week," reflected Natalie Kingham, fashion and buying director at MatchesFashion. "There's buzz around some of the London designers like Matty Bovan and Richard Quinn who are creative with a great energy."

Kicking off the week on Friday morning was Irish designer Richard Malone, who despite his nine AM time slot, managed to fill up the show space at 180 the Strand with a slew of influential editors and buyers. Malone's second runway show, as seen through the lens of journeys taken via the market stalls of the towns of his youth in Wexford, explored the importance of community. While never straying from his obsession with vulgarity, Malone showed hand-woven aprons in recycled viscose, colourful headscarves and artisanal jewellery — banal items often associated with the working class. "I cannot stand the idea of 'good taste,'" said the designer. "The idea that there is only either good or bad — one or the other. It's so arrogant, and so short-sighted to overlook what might lie in between."

Like Malone, Fashion East alumnus Matty Bovan took inspiration from his hometown, (in this case, York). The designer was triggered by a car ride across the North Yorkshire moors at dusk; this dystopian isolation formed the foundation of Bovan's superb, deconstructed collection. Garments in houndstooth checks were left ragged to give the prim-and-proper fabric a distinctively post-apocalyptic feel, while the use of fake furs resembled roadkill found on a remote country lane. Accessories were created from left-over pearls, plastic luggage tags and clay faces made by Bovan's mother. The giant balloons wrapped in tulle that closed the show were created by acclaimed milliner Stephen Jones and stood as a symbol for "carrying the weight of the world on your head, in a light way," according to Bovan.

The collection, the designer's fourth, was his most toned-down to date and it was refreshing to see his DIY aesthetic mature. Commerciality will come later, but for the time being, Bovan is creating a distinct language for himself — to his advantage. 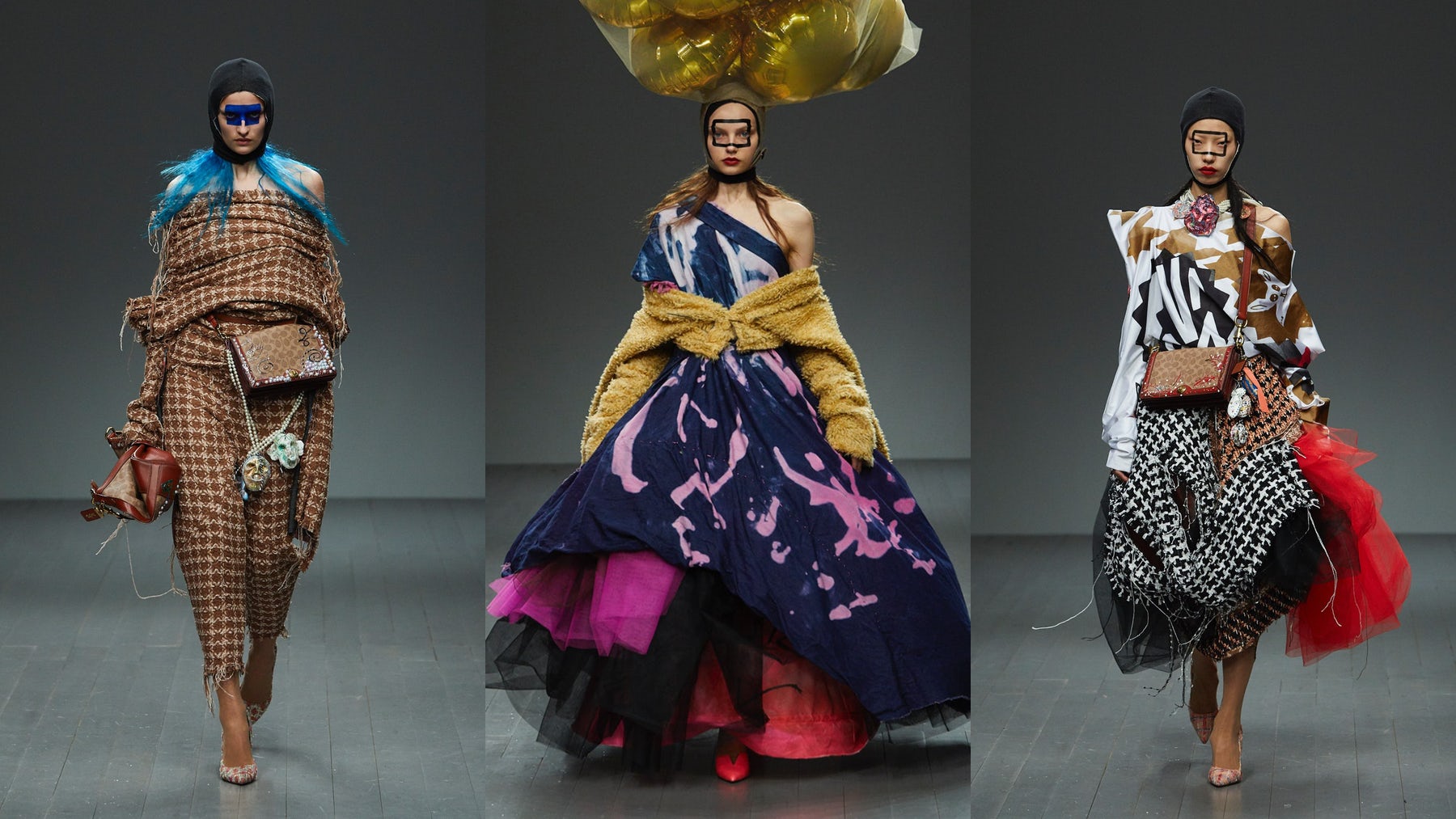 View Collection
Over at the Swiss Church, London-based Chinese designer Xu Zhi — another Central Saint Martins graduate — looked to Jane Morris, the celebrated muse of the pre-Raphaelite art movement. The result — hand-painted, PU leather outerwear, dresses and skirts in warm orange, dark-green and navy blue — are sure to be well-received by the brand's 50-plus stockists, which include Dover Street Market, Opening Ceremony and Lane Crawford.

The nostalgic longing for the comfort of home continued at Rejina Pyo, where the Korean-born designer told the tale of a teenage girl in the country, secluded from all-things digital, rummaging through her grandmother's old stuff. The show itself was held in the 199-year-old Burlington Arcade shopping mall. "Maybe I have a rose-tinted memory, but I miss the old days when things were a bit slower, families came together and when people were more connected," said Pyo, whose invitation included a childhood picture of her mother and her younger self.

Next was Paris-born Faustine Steinmetz, whose show reflected on cliché sartorial status symbols carried by Parisian bourgeoisie, like Fendi Baguette bags and Burberry trench coats. As with her signature denim pieces, Steinmetz deconstructed and reinterpreted the archetypes to create something new from the familiar. The results were Levis' 501 jean shorts in mohair, white cable-knit trousers and Swarovski-crystal embellished equestrian tops. "I find it funny when you work between reality and fiction, when things are not what they're meant to be," said Steinmetz.

View Collection
Eudon Choi, perhaps the most experienced designer from the pack — founding his label in 2009 — recently gained press and buyer interest thanks to his line of accessories. In response, the designer partnered with milliner Noel Stewart, popular demi-fine jewellery label Alighieri, and bag brand Decke for a collection based on the Cornish harbour town of St Ives. Here, a group of modernist artists settled post World War I and II, Christopher Wood, Alfred Wallis and Barbara Hepworth among them. Literal references of that narrative ran throughout the collection: think rough freshwater pearls, colourful waterproof fisherman's hats and raincoats in PVC and patent leather. The accessories that served to protect the subjects wearing them from outside dangers (symbolic?) will be the key to his success, especially when paired nicely with the minimalist sensibility of his ready-to-wear.

"I've always presented a vision of femininity that's quite furious and there was strength this season for sure, but something a bit more sensitive," said Findikoglu about her warrior-like clan of models, who mixed stereotypical, gender-defining outfits, like masculine pin-striped suits, with exposed lingerie. It was a bold statement against powerful men misusing their authority, a clever move from the designer who for years has been thinking a lot about what it means to be a woman.

Overall, the week left much room for thought. With Milan Fashion Week around the corner it is yet to be seen if London's new emerging designers will continue looking inward over the following weeks, or if the rest of Europe might feel it might need to look outwards for inspiration.

Community Is Core for Next-Gen Brands