LONDON, United Kingdom — Grace Wales Bonner hadn’t staged a fashion show in over a year. She'd staged an art show though — "A Time for New Dreams" curated by Hans Ulrich Obrist — which opened at the Serpentine Sackler Gallery earlier this year and has just been extended for another month. It was the perfect setting for her return to the fashion calendar: an all-standing show that opened with a reading by Ben Okri, elaborating on the themes that her artworks explored: black spirituality and intellectualism; magical realism and rituals; shamanic shrines; Afro-futurism; and historic black artists and writers.

She named her collection after Mumbo Jumbo, the 1972 novel by Ishmael Reed, who played the piano and delivered a poem during the show. Outsider artist James Hampton, who referred to himself as Saint James, also played a key part in the narrative. The two figures got her thinking about black intellectuals and how they interpreted their lineage, which led her down the path to Howard University, one of America’s leading African American colleges. That was where she delved into yearbooks and drew from the canon of familiar sartorial tropes from American colleges: varsity jackets, autumnal trench coats, flat-fronted trousers, roomy tweed tailoring and baseball vests.

Those intrinsically practical, retro-youthful clothes formed the basis of her collection and she imbued each with just the right amount of slouch and structure. Yet look closer, and you’ll notice touches of magic: feathers peeping out of pockets and sleeves; coral and cowries composed into brooches, elaborate hair combs decorating a Stephen Jones baker-boy cap. The talismanic stone jewellery was like ornately minuscule sculpture with all the quiet majesty of tribal crown jewels.

In many ways, Wale Bonner’s work has matured. Whereas once the designer would list lots of literature to bolster the academic gravitas of her collections and recoil during post-show interviews, this time around, she was ready to talk clothes with confidence. She has always made sensual clothes, after all, that speak for themselves, though this time, her focus was on spirituality. Is it that a period of withdrawal has put into perspective for her just how valid her work as a fashion designer is? Or could it just be that she has found the kind of mystic enlightenment that was inflected in her clothes? 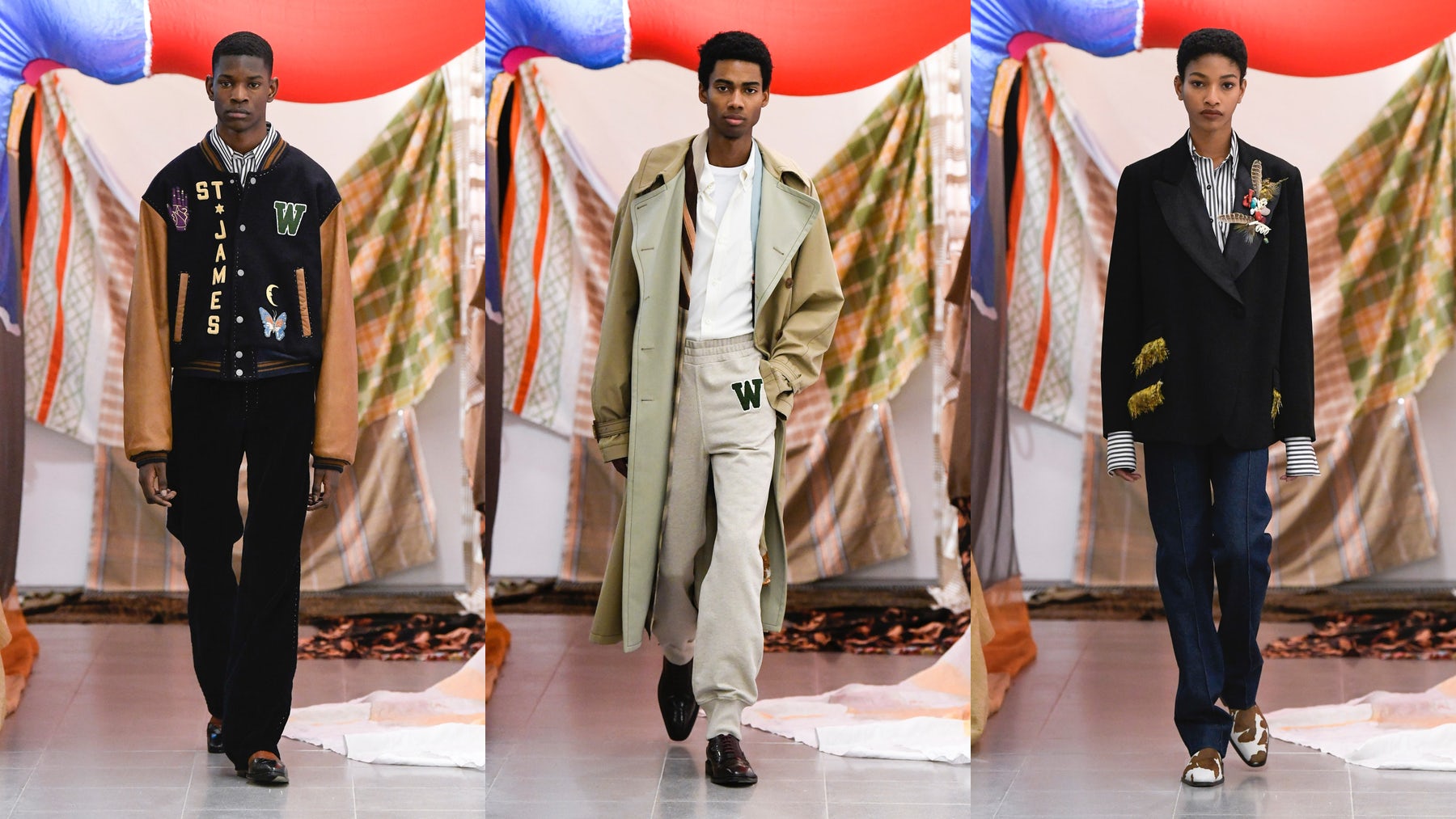 Roksanda Ilincic showed in an equally considered setting. Her sandy-floored set in the Old Selfridges Hotel was a collaboration with London art collective Troika, who reinterpreted their ‘Borrowed Light’ installation at the Barbican. Giant strips of rainbow-hued photographic film swept across the catwalk, reflecting and refracting light onto the neutral beach floor.

It was a poignant analogy for her collection, which balanced a rich jewel-box of colours — evocative of the forefather of bold hues, Yves Saint Laurent — with more subdued oatmeal tones. Ilincic is a master colourist, and this season she combined warm tangerine and shocking fuchsia (one of M. Saint Laurent’s favourite combos) as well as cobalt and marigold, and camel and bonbon pink. Yet the couture-like taffeta numbers was offset by a sense of survivalism, albeit very elegantly. Protective cargo jackets came in jewel-like satins, with bulky zips and softly rounded shoulders and peplum waists. “We’re living in a time of crazy contrasts,” she explained after the show. “I think it’s just this anxiety that we are all feeling.” A handful of her iridescent organza gowns were softly printed with images of deserted brutalist garages, an analogy that didn’t go unnoticed.

Roksanda’s woman, much like the designer herself, is preternaturally elegant, so you won’t ever find overt branding or sportswear within her repertoire. This season, the off-duty look consisted of creamy scoop-necked cashmere jumpsuits, gentle fastened at the waist by a drawstring or belted with a crisp-white belt. It will be a delicious salve for those who can’t quite handle such a potent fashion plate of colour. 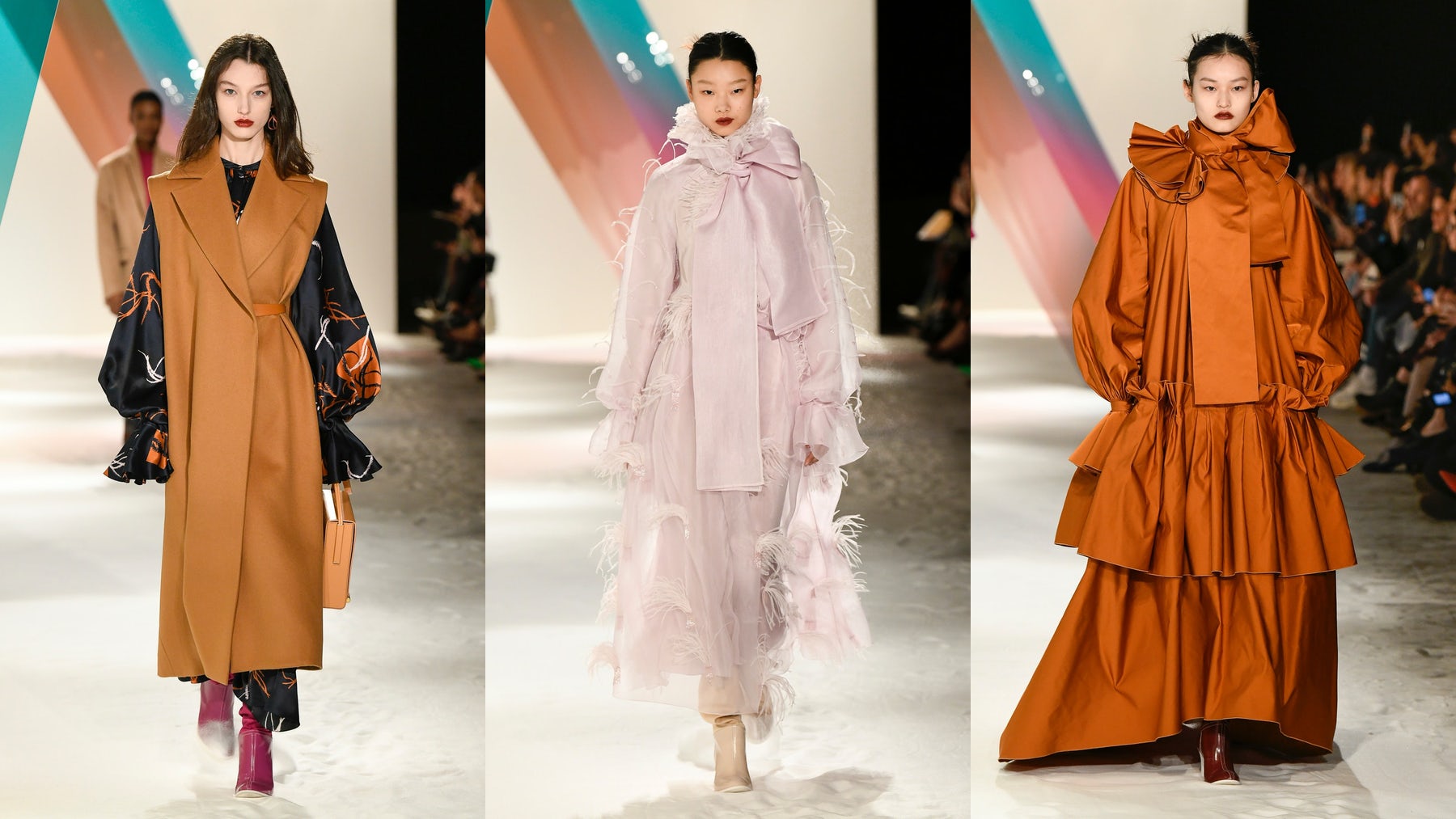 View Collection
Rejina Pyo once worked for Roksanda, but it seems Pyo has segued into an entirely different market. The commercially successful Seoul-born designer's modus operandi seems to be taking somewhat awkward sartorial ideas and making them easy to wear. Her clothes resonate IRL as well as through Instagram, eliciting symphonies of sighs from fashion’s street style set.

“It’s kind of a second-skin uniform there to protect us,” she said of her show. “I wanted to bring the best from each ere that empowered women at the time.” Hence ‘40s-via-‘80s power suiting with dramatically boxy shoulders that perfectly framed the draped palazzo fit of the trousers. In fact, Pyo’s tailoring was what scored the highest: a belted double-breasted blazer (mismatched panels, perpendicular shoulders, elongated hem) was a new take on something we’ve seen before and a collarless blue blazer (softly rounded shoulders, gathered waist, singular tortoiseshell button) looked great paired with soupy white trousers.

At Fashion East, the platform through which Wales Bonner and Roksanda began their careers, there was plenty of promise from a young Central Saint Martins graduate. Charlotte Knowles stole the show with her slinky parade of hyper-feminine utilitarianism. Her modern take on corsetry, once a symbol of female oppression, was imbued with a sense of modern ease and thoughtful construction.

Courtesy of its stretch and elasticity, her corset-harness hybrids are likely to flatter a wide range of bodies. The sharply sculpted tailoring was a standout, too. Here was the kind of tech-y, functional clothes that have gripped menswear designers for so long reimagined within tropes and codes of vixen femininity. As she graduates from Fashion East next season, she will surely join Roksanda and Wales Bonner as one of London’s female fashion stars.