The collection was remarkable in that it found new things — patterns, colours — to say with a vocabulary that has been well and truly explored. 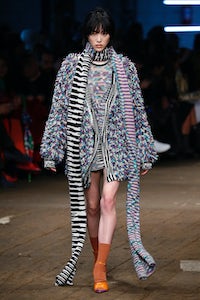 The collection was remarkable in that it found new things — patterns, colours — to say with a vocabulary that has been well and truly explored.

Milan, Italy — The Missoni exhibition that just finished at the MA*GA Art Museum in Gallarate, outside Milan (its next stop is London) was an illuminating overview of a business that is a youthful sixty-something.

There were plenty of decades-old outfits that looked like they could have been designed yesterday. So it was tempting to imagine Angela Missoni being turned on by the oldies-but-goodies as she launched into her new collection. But no, not at all. “I never look back,” she said definitively, after a show that did indeed seem free of any retro Missoni references.

In fact, the collection was remarkable in that it found new things — patterns, colours — to say with a vocabulary that has been well and truly explored. There was a sparky ingenuity at work in the way, for instance, the yarn that was woven into the layers of the opening outfits was also used to make shaggy coats in the same colours, or turned into a scarf of threads.

Oh yes, the scarves. Milan’s been a week of looooooong mufflers. Missoni’s bouncy floor-sweepers were the best. But there were also skinny tasselled ones, lurex ribbons, and massive striped blanket wraps. They were the accent on the voluminous silhouettes: the long coats, the baggy cuffed pants, the huge flares that puddled on the ground. And they were also like colour charts for the collection, the vivid new blues and reds sitting next to the classic Missoni shades.

The last few days in Milan have been salutary. Maybe it’s the Gucci renaissance that has sparked the Milanese fashion establishment to fire on all cylinders. Or maybe it was just well past time for these houses to redefine and refresh what they stand for. Like Missoni. Its signature has been boho-deluxe, but sex appeal didn’t necessarily follow artisanal ease. That’s changed. It’s partly the casualness of the trainers-with-everything attitude, but it’s also the way that loose has become louche. This collection ended on dark, fringed metallic knits. Moody glamour? Not bad for a sixty-something. 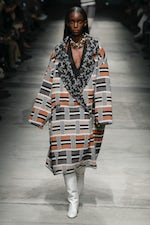 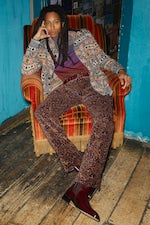 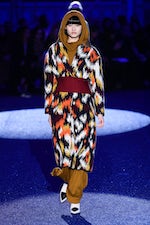 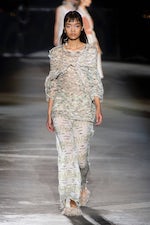