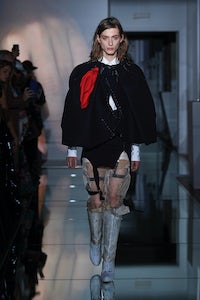 PARIS, France — How often in John Galliano’s 35-year career has he found inspiration in historical transitions, those moments when one culture is sliding into decadence and another emerges? Les Incroyables, at the tail-end of the French Revolution, shaped his graduate collection at Central Saint Martin’s. Since then, fin-de-siècle Paris, Weimar Germany, Warhol’s Factory — hey, maybe even Cleopatra’s Egypt… all these and more have offered a heady trove of over-the-toppery. And just how motivating it has been for Galliano was more obvious than ever with his latest Artisanal collection for Maison Margiela. The Utopian origins of the Internet are now smothered by the dystopian impact of social media. In his latest MM podcast, Galliano remarked on “a breakdown of social structure”. A new decadence. That was the cause. “Desire without reason” was the effect. He delivered the words with such seductive relish that you could feel yourself becoming a willing sinner on his behalf. That relish fuelled an anarchically beautiful collection.

Anarchy is Galliano’s default position. His life and work have been peopled with extraordinary, extreme characters, flipping their wigs in the name of beauty, love and madness. Galliano himself has been there, done that. While he was rehabbing in Arizona, he did three months of equine therapy with a horse named Blue. In his podcast, he called his latest collection an ode to Blue. His relationship with the animal allowed him to reconnect with absolute trust, but fetish, obsession and dominance also played a part. (Consider them as three totems of Galliano’s fashion decadence.)

That’s why, even if the backdrop was the primal beauty of galloping horses, there were other visions slithering through my brainpan. It was labelled a co-ed collection, which seemed a curious way to underscore its non-binary nature. Co-ed suggests an educational institution to me. Some of the male models were indeed wearing shrunken, moth-eaten school sweaters and schoolboy short shorts, even if they were gartered like Dietrich. There were also sailor scarves, echoing those worn by Tadzio, the teen love object in Luchino Visconti’s “Death in Venice”. The grand, dying fall of that film would once have been the veritable catnip of decadence for Galliano. Here, he defined a new kind of non-binary grandeur with the outsized scale of his dismembered “clichés of couture”: a tightly cinched Leon Dame parading, hands on hips, like a boy “Blue Angel”, and then, ten looks later, supermodel Natasha Poly, a Hogarthian spill of barely corseted bosom topping a full-skirted new New-ish Look. “Nomadic cutting” is how Galliano labels his discombobulating exercises in tailoring, the way, for example, a single cuffed trouser leg seemed to expand to become a columnar gown, or the fly of a pair of tweed trousers was wrenched into the form of a bustier.

Before his show started, we stood for 45 minutes, gradually surrendering to the vertiginous illusion created by Katarina Jebb’s giant nude photographs artfully projected on ceiling and walls, nipples and feet drifting by in a techno-reverie that was incongruously underscored by the classic French chansonnier Jacques Brel. The ceiling looked dangerously distant reflected in the mirrored floor. That was surely the disorienting point. In much the same way, Galliano saturated his clothing with digital imagery, classic patterns and textures — houndstooth, tweed, fur — projected onto organza and shimmering techno fabrics, and laid over wool or mohair. He punched holes in everything as an abstraction of lace or polka dots, arch couture tropes. (The gesture recalled one of Rei Kawakubo’s most radical fashion statements, the “new lace” she made from hole-y knits in 1982.)

It’s always been Galliano’s genius to set the mind pulsing with atavistic echoes of art, movies, theatre, history, nightclubs I have known and loved. In his podcast, he talked about the overlayed prints conveying the notion of his models walking through a projection. Nothing is real. That is NOW in the Era of the Elevation of the Fake. But it also reminded me of Galliano’s watershed couture collection for Dior in Autumn/Winter 1999, inspired by “The Matrix”. What happens when Louis XIV takes the red pill? We pray for a revolution.