Artifice has always been a mean motivator in John Galliano’s world. With his new Artisanal collection, he concentrated on creating a new creature and demonstrating how the artificial becomes the authentic. 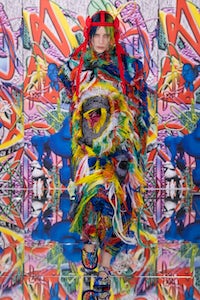 Artifice has always been a mean motivator in John Galliano’s world. With his new Artisanal collection, he concentrated on creating a new creature and demonstrating how the artificial becomes the authentic.

PARIS, France — The circularity of pop culture is a fascinating phenomenon for anyone with the curiosity, stamina and memory to weather its endless churn. John Galliano’s podcasts for Maison Margiela are purest performance art, with a concomitant cult following. But as I was listening to his latest – with its talk of glamour yielding to decadence, with its mention of the playful use of the poodle in the new Artisanal collection, and la malaise du fin de siècle that is plaguing Gen Z – I was irresistibly drawn back to Toronto art collective General Idea, who, in the 1970s and 80s, founded a substantial and influential body of work on each of those notions, minus the Gen Z bit. Why it should be the poor poodle – one of the smartest of all dog breeds – which became emblematic of civilisation’s decline and fall flummoxes me. I blame the breeders and their canine topiary.

But GI’s poodle rampant found a co-relative in the Klein blue version that proudly pranced through the Artisanal universe on Wednesday morning. Likewise the idea of fin de siècle, the endgame that inspires artists to extremes. Glamour has magnetized Galliano his entire career. In the fin de siècle, the end of a cycle, the mad pursuit of glamour has often been symptomatic of social decadence. General Idea had 1984 as their boogeyman. Galliano settled on over-indulgent, over-saturated social media, Big Brother in lipstick and a boob job.

Artifice has always been a mean motivator in Galliano’s world. His new Artisanal collection was co-ed, which meant he could dispense with gender issues and concentrate on creating a new creature. In the podcast, he talked about how the artificial becomes the authentic – or actually the “authentic” is redundant, because all that counts is the result. The clothes set about demonstrating that principle. “Decadent cutting”: take a trench and cut a pair of skateboarder’s shorts into it. Alter its reality. That, for Galliano, was decadent.

The podcast illuminates his process. It’s better you hear it from John because it’s idiosyncratic and complex. But it has an internal logic that does make sense. Galliano talks about Baudelaire and Huysmans, names that resonate with wannabe teen decadents all over the world. General Idea were intensely conceptual, but they had that same pull. I usually felt stupid in the face of their smartness, but I always liked what came out of it. And I felt the same way about the Artisanal show. Its internal logic was manifest in the way it spiraled from colourful chaos to monochrome rigour. “Examining if inverted excess could lead to a new appetite for restraint,” as the press notes proposed. Good lord, that’s practically spiritual.

Galliano’s closer on his podcast was that he felt the questions his work pose have never been more relevant. “Because where are we going?” Please indulge me as I reproduce these words written by Kerstin Stakemeier, a Berlin-based art historian who contributed to General Idea’s “P is for Poodle” exhibition at the Mai36 Galerie in Zurich in 2013: “The future seems to be in crisis, and the past re-emerges amongst the present tense, calling for cultural values to be resurrected. GI demonstrates how such temporal inversions can be a source of limitless and ongoing self-invention instead of conservative nostalgia.”

He could be talking about John Galliano.