After several lacklustre seasons, Osborne and Chow turned their political and personal frustrations into a clear-and-coherent collection. 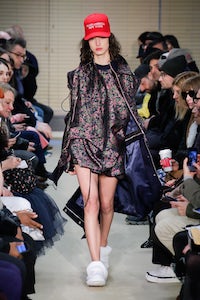 After several lacklustre seasons, Osborne and Chow turned their political and personal frustrations into a clear-and-coherent collection.

NEW YORK, United States — Maxwell Osborne and Dao-yi Chow are mad as hell. So mad, in fact, that they produced red “Make America New York” caps for their Autumn/Winter 2017 runway show, unfazed by the potential blowback from those living outside of their liberal New York bubble.

After all, isn’t the concept of otherness, an air of superiority, part of what got us here what got us here in the first place? Isn't it the reason for those "Make American Great Again" caps that helped get Donald Trump elected?

“That bubble has burst,” Chow said backstage at Milk Studios before the debut of the brand’s dual men’s and women’s collection. Instead, the idea was to suggest that New York should serve as an example for others. "We wish the rest of the States were like New York from an inclusivity standpoint, from a diversity standpoint, from an action standpoint.”

In a season where political statements are expected — if not demanded — on the runway, Osborne and Chow have been using their platform as a speakerphone for some time. Last summer, when then-presidential candidate Trump was going on about his imaginary wall, the designers built an actual wall at their show, tagged with the words “We need leaders.”

“Can we go back?” Chow asked. After all, it was a simpler time: Not only politically, but also professionally. (The news had not yet broken that DKNY, where the duo were then creative directors, was about to be sold by luxury conglomerate LVMH to licenser G-III. Chow and Osborne officially departed at the end of the year.) "It’s uncomfortable,” Osborne said of all the different shakeups in their lives. "We’ve gotten uncomfortable. Nothing is comfortable about it… and we have to confront that,” Osborne said.

But here’s the thing. Back when things weren’t easier, Osborne and Chow weren’t making good clothes. There was a lack of focus, and a lack of ideas. They seemed drained from doing two jobs at once. This fall’s women’s collection, on the other hand, was the best they’ve ever produced. More coherent, clearer, more desirable. “Safe is what got us here in the first place. It’s not about being safe anymore,” Chow said. “We challenged ourselves to push it a little further.”

The women’s line — which could easily outgrow the men’s, if they execute it properly — had the right balance of sport and sex. A jumbo puffer tailored to slide off the shoulders and cinched together with a knit corset, or a pair of cobalt blue drawstring track pants in a sturdy diagonal-weave cotton, cut to sit right on the waist, pinged off the body with lots of good energy.

Paisley patchwork in both men’s and women’s looks played into that Americana-tapestry idea that has been quilted into several collections this season, while an image of Michael Jordan gazing up from the three-point line, screen printed onto a couple of sweatshirts, communicated hope. On the back of a few pieces, Chow and Osborne re-iterated that statement from their last show: “We need leaders.”

The duo may never be that for New York fashion — their ideas about clothes aren’t particularly inventive or creative — but today they showed that when they’re able to funnel their ideas about social change and general decency into their work, they make clothes that people will actually want to buy.