Downbeat media coverage paints a portrait of a king diminished, but Jacobs’ uncompromising collection felt like his most pointed up-yours to commercial nitpicking. 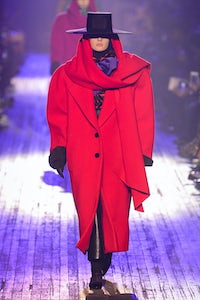 Downbeat media coverage paints a portrait of a king diminished, but Jacobs’ uncompromising collection felt like his most pointed up-yours to commercial nitpicking.

NEW YORK, United States — For as long as I can remember, Marc Jacobs has closed New York Fashion Week with a show that was invariably high point as well as finale. His conceptual bravado was increasingly matched by extravagant showmanship, and, underlying both, a dry New York wit, an appetite for controversy and a shrewd instinct for the mood of the moment. They made Marc king of the mountain.

But even the greatest of his spectacles — the Ziegfeld Theatre spectacle, for instance — was rooted in something personal. That book remains to be written, the story of Marc Jacobs as told through his shows. When it does happen (please make it soon), these past few seasons will provide plenty of grist for the writer’s mill. They offer a stark epilogue to everything that came before.

Downbeat media coverage paints a portrait of a king diminished, kingdom shrinking, coffers bare. It’s testament to Jacobs’ genius that he’s been able to turn limitations into strengths. In one show, silence is a deliberate soundtrack, in another, the sheer cavernous space of the Park Avenue Armoury, where Stefan Beckman once built fairytale backdrops for Jacobs, becomes the set. And the clothes themselves have been just as heady with self-expression. Maybe even more so, more extreme, more defiant, less compliant. To go from a company allegedly on the brink of a massive public offering to this? Who wouldn’t get mad? And want to get even?

And so it was on Wednesday night. The audience ranked down either side of a narrow catwalk that bisected the full length of the Armoury. Beckman’s “set” was literally bare, splintery boards, but across it, Jacobs marched a small army of women dressed in ancien régime couture, extravagant enough in its original 1980s moment, exploded here into confrontational silhouettes, gigantic duchesse bows, huge blossoms of taffeta, sweeping cashmere capes and infanta skirts, an acreage of moiré and pearlised leather, all in dense shades like ruby, jade and fuchsia that were so characteristic of the 1980s, with satiny Velasquez black as the counterpoint.

But where the Montana woman and the Saint Laurent woman enthralled and seduced with their otherworldly hauteur, here you choked on the excess. Like fancy dress for The Vanity Fair Diaries, with the contemporary twist that it felt accusatory, rather than celebratory. There was something quite Gothic, even funereal, about all the dramatic black, and the wide-brimmed hats shading faces. The hair and makeup also had a dark, angular Gothic tinge. And the fabulously unhinged soundtrack was the music from horror classic “Candyman”. Case rests.

It wouldn’t be the first time Jacobs has shown skill as a social satirist. And what a moment to air it once more, with the New Plutocracy crying out for the guillotine (set it up in the Armoury and the wheels of the tumbrels would make a satisfying noise on those bare boards). But, in keeping with his capacity for personalising even the grandest design, Jacobs’ uncompromising collection also felt like his most pointed up-yours yet to all those people who’ve clouded his once glittering career with commercial nitpicking. And he knows who they are.