One thing that is enduringly wonderful about Marc Jacobs is the way he spins his own youthful obsessions into such convincing, contemporary fashion fantasias. 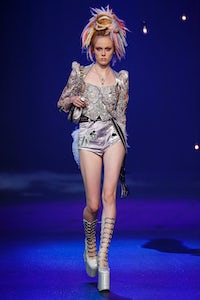 One thing that is enduringly wonderful about Marc Jacobs is the way he spins his own youthful obsessions into such convincing, contemporary fashion fantasias.

NEW YORK, United States — Marc Jacobs’ vision of a world populated by manga Slits was so sublime, so joyous that the woes of the world stood still for the duration of Underworld’s Born Slippy, the one and only piece of music on the show’s soundtrack. The signature do of Slits chanteuse Ari Up was duplicated in the models’ towering, multi-coloured dreads, the girl gang ethos of her band infused a catwalk energised by the platform-booted stomp of dozens of beautiful, careless young women.

The catwalk was forested with thousands of dangling light bulbs. It looked like a splendiferous art installation, but it could also have been fireflies, transient little flashes of beauty, born to die. And there was that same quality in the clothes: the sheen and flicker of butterflies’ wings in tiny lamé jackets and flared skirts, the metallic gloss of Art Deco motifs, the lurex threaded through tweed or the starburst of crystal on a midnight velvet bomber, the witty, sly baby doll mood, all of it inevitably invoking that early 1970s paradise when it was very heaven to be young and under the spell of the Starman himself.

But even with the heady glam factor, this wasn’t a collection about the ghost of Ziggy. One thing that is enduringly wonderful about Marc Jacobs is the way he spins his own youthful obsessions into such convincing, contemporary fashion fantasias. The tininess of some of the looks here — the little smock tops with their leg’o’mutton sleeves paired with hot pants, gangly girlish legs emphasised by candy-striped thigh-highs — was textbook Biba dolly bird (admittedly, that’s scarcely a vision of womanhood that the media is keen to promote), but in the purest fashion context — which this clearly was — it felt vital.

And “felt” is the key word there. There was obviously research, but there was never a moment where anything was academic. Here, for instance, Jamie Bochert in her scoopback lamé zebra micro-dress was like a baby version of the Swanky Modes tigresses who dominated Camden Town in the early 1970s, but you hardly needed to know about that epochal boutique to respond extremely favourably to her look.

Another Camden sub-culture — the cyberkids, the fabulous fashion mutants who took glam, punk, tech and rave to hybrid heights in the 1990s — also squeezed itself onto the catwalk in a 21st century update. Another similar decade span embraced Mr Freedom in the 1970s and Pam Hogg in the 1990s. Marc Jacobs takes you back to school.

That’s because his eye for synchronicity is peerless. Once, Karen Elson might have opened his show. Today, it was Kiki Willems, another spectacular alabaster-skinned redhead, who had that privilege. It’s the kind of detail that confirms that the designer always has a big picture in mind. You can bang on about political subtext this season (isn’t it hard not to?) but Marc Jacobs has already broadcast his proclivities, and his latest collection confirmed his commitment to live and let live, in the spirit of glam, punk, rave and all the new gods we bow down to.