An erratic nature established the rhythm of the show and may have stood in the way of a full appreciation of the collection. 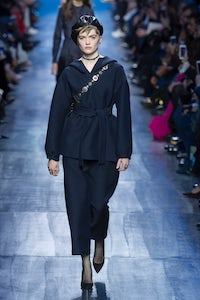 An erratic nature established the rhythm of the show and may have stood in the way of a full appreciation of the collection.

PARIS, France — Christian Dior believed navy blue had all the power of black. That discovery was Maria Grazia Chiuri’s launchpad for a collection which dwelt so unabashedly on blue that it was obviously going to be a polarizing experience for its audience. There is certainly a precedent for designers shaping a major career moment by sticking to one colour. (Why, Chiuri’s mentor Valentino did it with white in 1968.) But there were some who claimed Chiuri's show on Friday afternoon as a fireable offence, an insult to the various legacies of all who’ve come before Chiuri. Equally, there were others who saw it as a boldly rigorous expression of the very heart of Dior. Mats Gustafson, official artist of the house, would surely find a line he would love to draw in this collection. That hasn’t always been the case in recent seasons.

It’s not just her gender that makes Chiuri a controversial lightning rod of newness at Dior. She is also a mother, and, like mothers everywhere, she conceded utter mystification in the face of the new generation’s approach to life. “I’m the 'black' generation,” she said, resigned to her own Gothic style signature. So does that make her daughter and her friends the "blue" generation? It was hard to look at the sporty pragmatism of a lot of the clothes on the catwalk without reaching that conclusion. If nothing else, Chiuri’s designs represented the apotheosis of the hoodie. At the same time, a taffeta jacket allied with a sheer embroidered skirt felt like a modern take on sophisticated youth.

But she was selling herself short when she claimed she didn’t get the…argh…"younger" generation. Chiuri’s obsession with blue took her into interesting areas for Dior. Blue is the colour of uniforms. School uniforms. Military uniforms. All sorts of casual utility. She showed denim dungarees, for Christian’s sake. But right after Binx Walton in faded cotton drill, Chiuri offered a floor-sweeping confection of crystallised tulle, sparkling like the Milky Way. That erraticness established the rhythm of the show, and may have stood in the way of a full appreciation of the collection. An edit would have helped too. But there was also a glorious, iconoclastic confidence in the way Chiuri could skate from monastic navy rigour to a black velvet dress strewn with the luminescence of the cosmos. She even combined the two when she layered a utilitarian wrapped jacket over a taffeta skirt embroidered with moons and stars. The crossbody bags, equally ornate, embodied the same combination.

Chiuri truly jumped into the deep end when she left Valentino for Dior: an entirely new fashion culture coupled with a language she didn’t speak. She still doesn’t speak the lingo, but she definitely made more concessions to France with her new collection. Like this: every model wore one of Stephen Jones’s black leather berets. What is more French than a beret? Except that Chiuri established her appetite for activism last season, with her “We Should All Be Feminists” t-shirt, and her choice of headgear – echoes of the Black Panthers – carried it forward. There was also a bandana on every seat, an extension of BoF’s #TiedTogether initiative. It carried this message: “Feminist: a person who believes in the social, political and economic equality of the sexes." How can you deny that? Yes indeed, we should all be feminists.