This collection came across as a commercially astute proposal from the designer, who already proved himself a master of prints. Now we get that he’s also a pretty mean tailor. 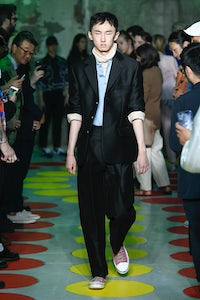 This collection came across as a commercially astute proposal from the designer, who already proved himself a master of prints. Now we get that he’s also a pretty mean tailor.

MILAN, Italy — Each guest at the Marni show on Saturday was assigned a dot to stand on, like a great big game of Twister, because twisting is what Francesco Risso does best. The role he played on Saturday was wedding planner. He imagined his show as the ceremonial union of Truman Capote and Che Guevara, the mixing of two worlds opposed beyond all comprehension: pretty-boy Capote in the famous photo by Henri Cartier-Bresson, guerilla Guevara in the equally iconic image by Alberto Korda. Risso envisaged Capote abandoning high society refinement to embrace “the jungle of radicalism.” In the baldest fashion terms, this could be reduced to a knit polo shirt vs. a camo jacket. Risso gave us that. But there was a deeper philosophical thread: do we live our convictions, or do we just wear them on our sleeves?

Risso came at that question from a couple of angles. He insisted his position was humanistic, not political, but that was disingenuous. How can you not exercise some political sensibility when you’re touching on the issues Risso addressed in his show? For one thing, it was staged under a cloud of aquatically-lit plastic waste, dutifully collected for months by Marni staffers from roadsides, seasides, any sides where heedless humans dump their shit. The audience was like a group of post-apocalyptic Ariels, submerged under the Sargasso Sea of plastic that chokes the mid-Atlantic. Risso claimed it would be transmuted by artist Judith Hopf after the show. One man’s garbage is another man’s art? It took soundtrackist Frederic Sanchez to create an aural co-relative. He ground together the X-Files theme, a voiceover by William Burroughs, “Rock Lobster” by the B-52’s, and a honking sax-driven thrash by UK punk pioneers the Damned to create a densely textured difference.

What makes London such an enduring presence is its variety of voices. Good, bad or indifferent, there is always a polyglot energy. It’s easy to miss that elsewhere, and that is why Risso is such a welcome addition to the Milan calendar. This Marni collection actually came across as a commercially astute proposal from the designer. He already proved himself a master of prints at Prada, his previous gig. The Fauvist-camo prints here were equally masterful. And now we get that he’s also a pretty mean tailor. There were suits to satisfy Risso’s most cautious customers. So, knowing all that, I was happy to sit back and enjoy the scenario that Francesco Risso, wedding planner for the Capote-Guevara nuptials, was ready to offer me. Some of the models wore Che’s beret, but others had picture hats spun from garbage by artist Shalva Nikvashvili. Leigh Bowery would have loved them. The footwear was equally schizophrenic: oxfords vs. scuffs, cobbled together from the Lord Of Chaos knows which bits and pieces.

Half and half – it is Risso’s design ethos, embodied by all the jackets and trousers that stitched opposites together. The political import of such togetherness was inescapable.