Francesco Risso’s work for the Italian brand has so far been a protean proposal, glorying the great unfinished, but there was more discipline, in his latest designs. 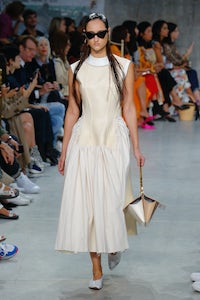 Francesco Risso’s work for the Italian brand has so far been a protean proposal, glorying the great unfinished, but there was more discipline, in his latest designs.

MILAN, Italy — It makes sense that a collection as joyously, inspiringly wayward as Francesco Risso’s Marni would come from a place of wondrous peculiarity.

Risso had been contemplating his online purchases, including a finger puppet of Dr Frankenstein (I got the Edgar Allen Poe one!) and a whole lot of Venus de Milos, and that inspired him to imagine Frankenstein making Venus come to life. And then he saw “All Too Human”, an exhibition at Tate London of Francis Bacon, Lucien Freud and other 20th century British masters painting nudes, and that got Risso all fired up about the power of the body, and the magic of the artist’s process, and how a blank canvas is like a designer’s toile, waiting to be transmogrified by the creative big bang when form is given to the formless.

“I want the paint to work as flesh does,” Freud said in 2009. Looking at the collection Risso showed for Marni on Sunday, it was easy to imagine him feeling the same way about fabric. He moulded and draped it, and dabbed at it like he was painting. Risso’s Marni has so far been a protean proposal, glorying in a sense of the great unfinished, but there was a discipline in his latest designs, maybe driven by the tireless quest of artists like Freud and Bacon… or Victor Frankenstein, for that matter.

The old spirit of raw deconstruction was infused with a desire for re-construction, especially in the jackets and knits. And the palette was sensational in vivid collaged prints with colours running into each other. There was still a feeling of urgency, but now it felt like there was a destination.

Maybe Risso’s profound connection with the art world stems from his own appetite for surrealism. The audience sat on made-up beds, with pillows. “Intimate,” Risso clarified mildly. At one point, I thought I saw a skirt trimmed with lollipops. It wasn’t, but if there was ever to be a skirt trimmed with lollipops in a fashion show, it would be here.

The most gorgeous expression of this was in The Best Shownotes Ever, a Dada farrago that included references to “Caramelised magnanimity” and “Flambé ferocity”. The notes were ostensibly a recipe for a mattress (for one of those beds?) but they were equally a meditation on the work an artist or a designer does in their studios, as dozens of ideas coalesce into a single concept. “Cook at five thousand years for eternity,” the recipe concluded. “Serve hot, like an unexpected slap.” My cheek is still throbbing.