Risso struck some perverse chords in his new collection, but the invitation to abandon didn’t quite work and the clothes seemed oddly literal. 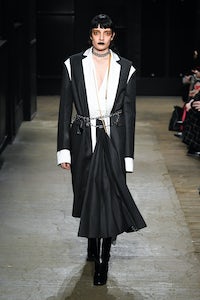 Risso struck some perverse chords in his new collection, but the invitation to abandon didn’t quite work and the clothes seemed oddly literal.

MILAN, Italy — His men’s show in January posed such huge questions and offered such alluring responses that Francesco Risso’s new womenswear collection for Marni seemed oddly literal, almost banal by comparison. And it really needn’t have been that way. Risso’s imagination must be a sensuous, riotous place to be. NEUROEROTIK was his latest destination, defined in shownotes as a no-holds-barred face-off between spirit and flesh. OK, possibly less playful than Risso’s usual arena, but definitely ripe with possibilities for pushing the disorientingly gorgeous chaos that has given Marni a vigorous new voice in Milan’s hidebound fashion community. The flagrant sensualist met the strict maitresse. Surprisingly, the maitresse won.

They’ve already met, of course, under the codes of behaviour that define the fetish world. What’s your safe word? After this show, you wondered if Risso needed one. Even acknowledging the random dishabille of some of the outfits (reminiscent of the bouleverséquality that John Galliano always cherished), there was still an overriding sense of discipline and control: big boots, big coats, black leather. Couple all that with a primary palette of black, white and red, and I was getting shades of “The Night Porter,” Liliana Cavani’s sado-masochistic shocker from 1974. Risso struck some perverse chords in his new collection — the red and white satin shifts pinched with dozens of rings (engagement rings, according to the shownotes) being just one, the trailing chains that draped nearly everything being another — so maybe Cavani’s BDM sex games weren’t so far off the mark. The hair and makeup gave me wan Weimar decadence, the pixelated prints that closed the show suggested censorship. And if that wasn’t so, then it’s clear I was lost to Risso’s Neuroerotika by that point.

I’m thinking that was his intent: an invitation to abandon. It didn’t quite work. From start to finish, there was a sameness in the silhouettes, the drape, the scale, the elongation (and the infuriating soundtrack). And I feel I saw RED. But Risso is a risktaker, and the nature of a risk taken is that it won’t necessarily yield a reward. I’m happy to settle for the huge orange leather coat which will hopefully be gladdening the racks of a store near you come next autumn.