As a sequel to her blockbuster breakout show last season, Rose's natural and sincere ode to London did not disappoint. 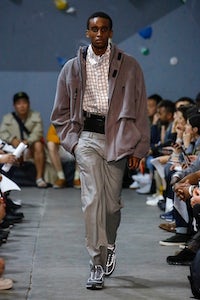 As a sequel to her blockbuster breakout show last season, Rose's natural and sincere ode to London did not disappoint.

LONDON, United Kingdom — The sequel to Martine Rose's blockbuster breakout show last season didn't disappoint. Those perpendicular shoulders were still there on the perfectly boxy tailoring that Rose has made her own — at both her eponymous label and through her contributions as a visiting member of the Balenciaga design team.

This season those shoulders were slightly softened as an "outdoorsy," alternative to the strictly buttoned-up corporate influences of her prior show. They were also worn over shearling fleeces, thick cotton shirts, Rose-branded cycling shorts and triple-waisted trousers with enough pockets to hold the contents of a rucksack.

The space in which the show was held did a lot to contextualise the suburban athleticism of the clothes: a Tottenham rock climbing centre, all grey walls scattered with grips in saturated colour, was perfect for the uncool cool sensibility ("Dad-wear," someone called it backstage). Someone else pointed out that Rose used a photo of Jeremy Corbyn in his Wilson shell-suit for the show's e-invite. "A massive inspiration," laughed Rose.

Don't let that put you off. The finish on the clothes, from the branded belt buckles and lightweight wool fabrics and plenty of T-shirts and casual staples is the reason why Rose is one of the most internationally stocked London designers. She even included a couple of womenswear looks, which she pointed out she has always done, but wanted to offer something more while remaining very much a menswear label. Plus, most women who buy this designer’s clothes — and there are a lot of them — are looking for an androgynous fit without the contrived feminine details in menswear-inspired womenswear.

There was even delicious Caribbean fried fish and mango canapés served up beforehand, from a small restaurant nearby. Even though Rose mentioned Toronto’s underground electro music scene as a major reference (it came through on riffs on MTV-logos and graphic sportswear), the whole set up of her show, including the clothes, felt natural to the local community that Rose is very much a part of. The result felt sincere to the designer and her vision of London.