This may have been Mary Katrantzou's most extreme diversion yet, and it was a delight. 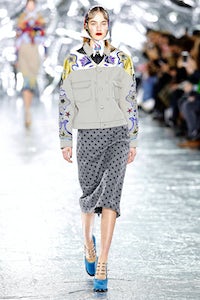 This may have been Mary Katrantzou's most extreme diversion yet, and it was a delight.

LONDON, United Kingdom — First impression of Mary Katrantzou’s venue: Mary’s going POP! A backdrop silvered like Andy Warhol’s Factory, with helium-filled silver pillows floating everywhere, like his famous 1966 installation at the Leo Castelli Gallery, definitely set a mood. But the first burst of Frederic Sanchez’s soundtrack of country-pop chantoozies accompanied a woman in a headscarf, wearing a pencil skirt and a micro-checked jean jacket with leather appliques that were purest Nashville. Not at all the sound or the image of the Factory, let alone the world that Katrantzou has created over the past eight years.

Mind you, she’s been toying with expectations for a few seasons. This may have been her most extreme diversion yet, and it was a delight. It was certainly her most cinematic effort, throwing up images of prom princesses in pleated tulle, roadhouse floozies in nylon plissé, rodeo queens in jackets, shirts and skirts decorated with glittering curlicues. Americana! And all to that sweet soundtrack.

And if the Warhol reference initially seemed a bit of a red herring, it began to make a different kind of sense as the show went on. The palette of Pop! coloured the clothes. Katrantzou used the iconography of Pop!: hearts, stars, butterflies. And Warhol was always enamoured of the same Hollywood archetypes you could see in her collection: the cowboy, the good girl, the bad seed.

Miuccia Prada has shared the same fascination in the past. Some in Katrantzou’s audience were uncomfortable with what they saw as clear echoes of MiuMiu, using that to suggest she is diluting the unique aesthetic that won her such early and deserved success. But if she shares anything with Mrs Prada, it is surely a creative restlessness that is taking her on a ride that won’t always be smooth. “Not being afraid of not being cool,” said Katrantzou while she was musing on her motivations. And there was a lot that wasn’t “cool” about her new collection: leopard-print blouse with nylon sleeves, leather shirt with ruffle, glitter hearts on a long herringbone coat, a cotton banker’s stripe elongated into a shirt-dress that, from the waist down, was plastered with hearts.

But if it wasn’t cool, it was still hot, with all the maverick conviction of the runaway lovers in Wild at Heart, the David Lynch movie she referenced (“If Nicholas Cage can wear leopard print, I can show it.”) And think about it. Is that American fairytale any less likely as a starting point for Katrantzou than typewriters or stamp collections or bathing caps or any of the other idiosyncratic inspirations that have lodged in her brain pan over the years? 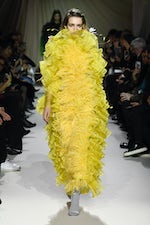 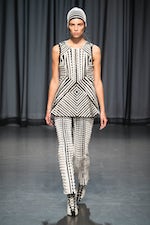 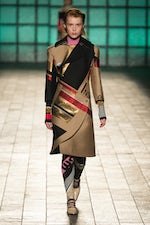 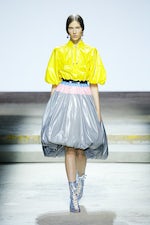