The long-time purveyor of the architectural, nipped silhouette embraced childhood and a new fluidity. 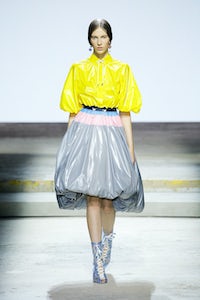 The long-time purveyor of the architectural, nipped silhouette embraced childhood and a new fluidity.

LONDON, United Kingdom — The mood was playful and glitzy at the Mary Katrantzou show this morning. The designer has never restrained herself when it comes to colour and embellishment, but she is also a long-time purveyor of the architectural, nipped silhouette. This season Katrantzou let loose, getting rid of everything too madame — or mademoiselle — and rigid. Instead, she embraced childhood, fluidity and, well, an avalanche of drawstrings, in case you wanted that nipped shape back.

The childish tropes were there in references to Lego-like building blocks, Crayola brights, the lightweight nylon of playground-ready windbreakers, inflatable toys and, again, the drawstrings. The result felt mature: of the crop of London designers who emerged in the 2000s, Katrantzou is probably one of the most business-savvy, certainly the one aiming at a clientele that's far wider than club kids and diehard fashionistas. There were vague riffs of Miu Miu here and there, but it certainly didn't feel like a rip-off. Overall, the collection worked. What was missing, however, was lightness: some of the pieces were so laden with fabric and embroidery, they felt heavy despite of the airy volumes.