There was once the most thrilling clarity in Katrantzou’s work, and while craftsmanship in this Bauhaus-meets-Victorian collection was extraordinary, it was hard to tell what it was in service to. 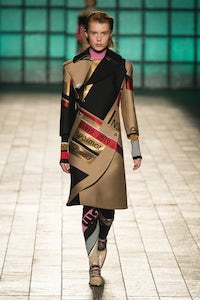 There was once the most thrilling clarity in Katrantzou’s work, and while craftsmanship in this Bauhaus-meets-Victorian collection was extraordinary, it was hard to tell what it was in service to.

LONDON, United Kingdom — Retrospectives have a knack of making artists introspective. After Mary Katrantzou’s recent exhibition in Dallas, she was struck by the threads that linked her collections. The one that really snagged her was modernism, and how it could manifest itself in unexpected ways. Flash forward to Autumn/Winter 2018, where Katrantzou’s meditation on modernism has brought her to a typically paradoxical point: the marriage of Bauhaus and Victorianism. You want to say it’s something as simple as opposites attract. She’d beg to differ. In William Morris’s commitment to the efficiency of mass production, she found a Victorian precedent for the Bauhaus’s industrial design for living. If it wasn’t exactly the grabbiest notion around which to build a collection, it explained the not-always-comfortable mix of art school lettering and dense Morris-influenced flora motifs. And, bringing the two together still further, there was a clear emphasis on construction. The collection was, after all, called “Interior Lives." So a brown leather blouson was as buttoned-back as a sofa at a gents’ club. Severely-tailored trouser suits were cut from wallpaper-inspired damasks. There were dresses with all the drape and swag of the curtains in a Victorian drawing room, and a fringed lampshade or two. The most successful look in the collection duplicated Victorian tiling in a skirt of intarsia-ed leather and matched it to a fake fur coat.

But the question nagged…why? There was once the most glaring, thrilling clarity in Katrantzou’s work. Here, there was confusion. Victorian tapestries surrendered to frilled pointillist fantasias. Those lampshade silhouettes over embroidery-crusted bellbottoms? Didn’t get it. The craftsmanship was extraordinary, but it was hard to tell what it was in service to. Perish the thought that, in looking inwards, Mary Katrantzou had lost sight of herself.