The designer's 10th anniversary show was a cool, complex mesh of digital mechanics and fierce technique, running smoothest when she cleaved closest to her original ideas. 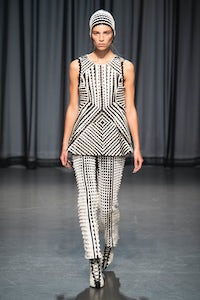 The designer's 10th anniversary show was a cool, complex mesh of digital mechanics and fierce technique, running smoothest when she cleaved closest to her original ideas.

LONDON, United Kingdom — A 10th anniversary can do things to a girl. Even though Mary Katrantzou describes Vangelis, Mr. Oscar-Winning-Composer-Of-Chariots-Of-Fire-And-Blade-Runner, as “the most incredible person I’ve met in my life,” and said he has been offering to do music for her forever, she was always too shy to take him up on his offer. But you’re only 10 once, so she finally plucked up the nerve to make the call. A bit infuriating for him, because she only gave him four weeks notice.

Nevertheless, the master of ambient uplift managed to produce an original soundtrack for Mary: The 10th anniversary in time for her show at London’s iconic Roundhouse on Saturday night. And that was just one of Katrantzou’s reasons to be grateful. She outlined others in her fulsome show notes: her parents, her life partner Marios and his mother, her team, and so on. That’s the kind of person she is. Mary is Greek, but in anyone else’s lingo, she’d be a mensch.

Which has made it all the more remarkable that, while she herself is the essence of human warmth, Katrantzou’s career has been such a cool, complex mesh of digital mechanics and fierce technique. That was something her anniversary show made clear: she has enthralled the eye often, touched the heart seldom.

The eye of the Roundhouse’s circular stage was draped in a curtain which eventually lifted to reveal a decade of Katrantzou’s designs, the seeds for the collection she presented on Saturday. The circularity was symbolic. She closed her latest runway show with the core of her very first one: the trompe l’oeil perfume bottles that were printed on her debut dresses. Here they were hand-painted on Swarovski crystal mesh, shimmering in robotic splendour as a measure of how far Mary has come. They were among the strongest pieces in the collection, especially in comparison with the Fabergé carapaces that preceded them.

The Katrantzou challenge has always been how to move on from her initial triumphs with the engineered printing that was so alien and irresistible. That’s where the overt complexity has intruded, especially with tricksy silhouettes. There were certainly enough of those.

Maybe it was instructive that the show ran smoothest when the designer cleaved closest to her original ideas. Her stamp collection from Spring 2013, for instance, which echoed across the show’s opening. A shift made of platelets that looked like blank stamps was particularly effective. So were the glittering op art grids of butterflies, shells and gemstones, cut into fitted jackets and fluted skirts.

“I love what I do,” Katrantzou said as she reflected on her anniversary. “I can walk to work happy.” The high points of her show suggested that she could also let herself relax a little with the rest.