Show notes talked about aether, the breath of the gods, a celestial puff of air. But it wasn’t heaven that was conveyed. 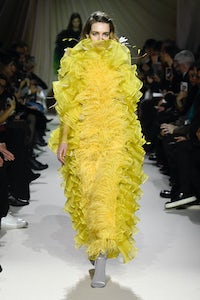 Show notes talked about aether, the breath of the gods, a celestial puff of air. But it wasn’t heaven that was conveyed.

LONDON, United Kingdom — Maybe it was hard for Mary Katrantzou’s show to recover from the initial blast of Natalia Vodianova easing on down the road in a cloud of citron ruffles and feathers. On the other hand, the image most certainly stated Katrantzou’s case with her new collection: grandeur, scale, elongation and enough width to embrace an entire landscape. Pierpaolo Piccioli has released the hounds of wanton extravagance at Valentino, which is liberating other designers to follow suit in their own fashion. For Katrantzou, that meant a catwalk eruption, her own version of the Big Bang, according to the rococo show notes which also referred to the designer’s “creation myth,” illuminated in the sequined, crystallised narrative that clotted various looks in the collection.

Katrantzou has always had to be the most precise of designers, symmetrical to a fault at times. She claimed “organised chaos” was her MO this time. “It was about finding structure,” she said, “an opportunity for silhouette and execution.” But she liked the idea there was some danger involved too.

True, when you go over the top like this, it’s an all-or-nothing proposition. Giselle Norman closed the show in another massive multi-coloured eruption of ruffled organza and feathers and sparkle, like a huge man-eating anemone. Those show notes were talking about aether, the breath of the gods, a celestial puff of air. But it wasn’t heaven I was feeling.