Mary Katrantzou may be doomed to be dogged by her early success. But here, at least, there were clothes whose peculiar beauty stood on their own. 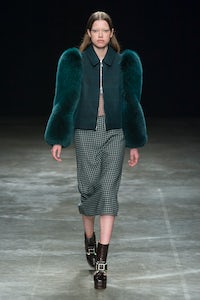 Mary Katrantzou may be doomed to be dogged by her early success. But here, at least, there were clothes whose peculiar beauty stood on their own.

LONDON, United Kingdom — Mary Katrantzou insisted the looks that populated her runway for Autumn/Winter 2017 weren’t character-driven, but the first model that appeared instantly evoked Joan Crawford, one of Hollywood’s most iconic stars, and that set the tone for a collection which sat comfortably on a perch labelled 1940s.

That was the decade which saw Crawford win an Oscar for Mildred Pierce, a classic of the genre known as film noir, whose spirit hovered over Katrantzou’s catwalk, peopled with nipped-waist checked jackets and fitted skirts, fur-collared sack coats, languid columnar gowns and clunky-heeled shoes.

One cinematic inspiration took Katrantzou to another: Fantasia, Walt Disney’s 1940 fusion of cartoon and classical music. The way the designer explained it, she’d been thinking about kingdoms of thought, which led her to the Magic Kingdom, and thence Fantasia. Ours not to question such conceptual leaps, but merely to appreciate Katrantzou’s eye for exquisite visual effects rendered in embellished fabrics.

She talked about screengrabs recreated in brocades and jacquards. The soundwaves which played onscreen during Fantasia’s demonstration of how sound is depicted on film were duplicated in the jagged embroideries which bifurcated dresses. The most haunting effects were achieved by printing psychedelic flora and fauna on stygian velvets. Scenes showing “Centaurettes” from the movie’s Pastoral Symphony sequence were also printed on velvet pantsuits, occasioning some reflection on the alleged chemically enhanced creativity of Disney's animators.

Katrantzou’s mastery of 3D effects was displayed in the way an otherwise simple sheath blossomed with anemones of feather and the crystallised fairies that floated across tulle gowns at the close of the show. They harked back to her spectacular cosmic collection for Spring 2016.

That reminder of past glories was salutary, rather than unwelcome. Maybe Katrantzou is doomed to be dogged by her early success. Maybe there’ll be people who say that Disney isn’t her way out of that situation. But here, at least, there were clothes whose peculiar beauty stood on their own. And, if you were inclined to subtext, you might choose to reflect on the way that Fantasia, on its original release, diverted an audience gazing into the darkening abyss of an uncertain future.