Paul Surridge made the rather odd point that he was thinking about 'status' with the collection. It didn’t really work, But the idea did provoke him into some clever twists. 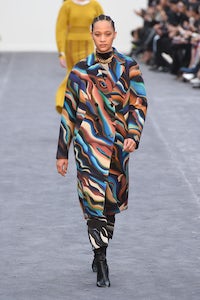 Paul Surridge made the rather odd point that he was thinking about 'status' with the collection. It didn’t really work, But the idea did provoke him into some clever twists.

MILAN, Italy — Paul Surridge has taken the intelligent approach to the house of Cavalli’s 47 years of history: forensically analyse the personality of the brand, winkle out what worked, modernise it, if possible. Trial and error, basically. The challenge has demanded the patience of Job from Surridge. But he is still smiling, still one of the most personable people on the Milan fashion stage. (For some reason, I think he’s more or less the same age as the brand, though maybe that Kismet is too peculiar.)

Anyway, this season, Surridge reattached himself to animal print as the animating principle in the Cavalli playbook. But he didn’t play the tiger straight. He messed with nature’s colour scheme throughout the collection, with tones more mineral than animal. The prints worked best when they were used in pieces that maximised movement, like the skirts with an almost-flamenco flare. Maybe they harked back to the ’70s, an early heyday for Roberto himself. I also thought ’70s when I saw a python coat, but you can blame the British fashion legend Ossie Clark for that. And once that decade was in my head, the palette — fuchsia, mustard, turquoise — started to feel like a step back in time. “Memory shapes the present and defines the future,” said Surridge, sagely acknowledging the virtual impossibility of original thought in fashion.

He made the rather odd point that he was thinking about “status” with the collection, communicating the notions of position and power through clothes. Gemma Ward in an imposing Napoleon coat with a single big gold button, for instance. It didn’t really work. Aren’t people who are concerned with their own status a turn-off? But the idea did provoke Surridge into some clever twists: the use of intarsia-ed shearling instead of fur was a fuck-you to alt-luxe. And the men's clothes in this collection (menswear being an arena where dress does traditionally communicate position) were a strong, salutary reminder of Surridge’s background — and the place where he is probably best off.