The irresistible buzz, the tension between purity, eroticism and rigour — what other designer can satisfy the same craving? 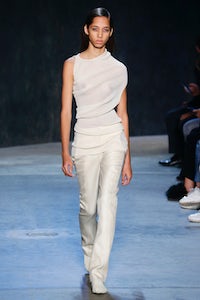 The irresistible buzz, the tension between purity, eroticism and rigour — what other designer can satisfy the same craving?

NEW YORK, United States — Narciso Rodriguez’s designs illuminate the way in which fashion can become an addiction for some people. You can see how, once hooked on his clothes, it would be hard for an addict to find another designer who satisfied the same craving, such is the irresistible buzz the tension between purity, eroticism and rigour creates in his work.

For instance, in his new collection, there was a mercury coated silk satin cut into a tank dress (seemed simple but not seamed simple) that looked exactly as you’d imagine mercury would look poured on the body. It would stop traffic.

Rodriguez achieved the same dull, alluring sheen with the black polished linen of a portrait-necklined shift or the bonded satin of a plain (but not) cardigan coat, also in black. Liquescent flou is a signature of his, but he’d never let it quite so long and loose before. You would say the effect was almost monastic if it wasn’t for the deep Vs on the tops and high slits on the skirts.

He insisted his work wasn’t about fashion or spectacle. “I wanted to bring things back to work and craft with this collection,” Rodriguez said. He defined his own core principles as femininity and athleticism. There is usually an intense steel-and-concrete urban-ness as well. It was here, along with a graphic that could have been a blurry city lightscape, and an accent colour Rodriguez called “safety orange” (which sounds a lot nicer than “biohazard orange”).

The most glamorous effect in the collection was achieved by beating metal rings and washers into a simulacrum of antique silver sequins. Applied to a bias-cut slip dress in that mercury silk satin, they helped create the dress of the week in New York.