There were some potential modern classics in the collection, but elsewhere, things got a tad over-the-top showgirl. 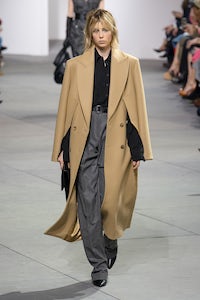 There were some potential modern classics in the collection, but elsewhere, things got a tad over-the-top showgirl.

He let the clothes speak for themselves, and what their old school glamour seemed to be saying was that living well is the best revenge — or at least the best salve for bruised optimism. The Kors woman is a dame who knows exactly what she wants. Hollywood’s most fabulous broads from the 1940s shadowed the collection’s dramatic coats and jackets, with their wide shoulders and nipped waists, but Kors had no problem listing contemporary equivalents: Beyonce, Gaga, Madonna, Annie Lennox. A live orchestra sawed its way through a clutch of their hits as the models prowled by.

Kors was hot for big cats. A brushed mohair trench in cheetah and a satin jacquard wrap dress in leopard were two stand-outs. It fitted with a woman-as-predator theme, one incontrovertible way to emphasise female strength and power.

“How do you do sexy without being naked?” he’d been asking himself. His answer? Clothes that were “sneaky sexy,” slashed or fringed or sarong-ed, constantly in threat of unwrapping. Kors was in love with the image of Patti Hansen in the 1970s, when it always looked like her clothes would fly off if the wind got up. And there Hansen was in the front row on Wednesday morning, forty years later and still as tousled and tawny as ever.

Her presence, top to toe in classic Kors camel, certainly backed up his stated goal: “What I’m always trying for is the ‘best friend’ pieces, the things you wear over and over.” There were plenty of those in the collection. Lush wool topcoats, cashmere sweaters, generous, pleated trousers, all of them timeless. And the  taffeta trench and cutaway jacket in glen plaid over a tulip skirt in herringbone were potential modern classics.

Elsewhere, things got a tad over-the-top showgirl. Mica, Julia and Kendall sported miles of piano fringing. Kors justified the lamé and metallic animal prints with his insistence that nothing illuminated the complexion like shine and shimmer. Re: which, the skirt with silver beaded fringing that looked like sparkling porcupine quills did actually have a kick to wake the dead. Almost opulent, in fact.