Successfully integrating menswear and womenswear for the first time was a testament to the brand’s constant ability to reinvent itself. 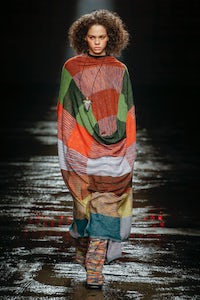 Successfully integrating menswear and womenswear for the first time was a testament to the brand’s constant ability to reinvent itself.

MILAN, Italy — Missoni’s ability to reinvent itself artfully detaches it from fashion’s persistent, nagging What’s-Hot?-What’s-Not? debate. If the fundamental things always apply — the zigzagging knits, the patchworks, the woven and twisted multicoloured yarns – Angela Missoni still finds ways to create a new story. This season’s synthesised Ghana and the Caribbean with suggestions of kente cloth in the pell-mell patterning and Jamaica in the hats and scarves and casual layering of colourful knitwear.

New this season was the integration of mens- and womenswear in the same show. It was a marked success, because they were so compatible that the one elevated the other. The inspiration for the women’s collection was Lisa Bonet. For the men, it was Jean Michel Basquiat. Who knows if those two ever actually met, but there was certainly a conceptual compatibility. And it’s always gratifying when a brand’s males and females look like they might actually get along. (It happens a lot less than you’d imagine).

The staging of the show was a distraction. The flooded catwalk was supposed to reflect the red lighting, a city’s mean streets after a downpour. All I could see was Missoni’s knitted finery dragged through puddles (the drycleaning bills!). But on reflection — and reflection was the intention, after all — the staging highlighted the collection’s essence. The elongated languor of the skirts and floor-sweeping cardigan coats, the nonchalance of knit jackets and net trousers carelessly dragged through urban dross, the bunches of thick fringing trailing in the water, the deliberate denial of preciousness… it felt kind of now-ish. So did the clusters of talismans hanging from the models’ wrists.

Missoni will shortly celebrate its 65th anniversary. Angela looked back on her own memories of that timespan and came up with things like the green pantsuit that Teddy Quinlivan was wearing. It took her back to the 1970s. Proof positive: Missoni is a fabulous time(less) machine.