It’s a testament to the Missoni magic that, after all these decades, its design signature is so adaptable. 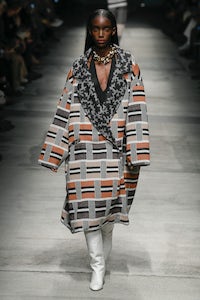 It’s a testament to the Missoni magic that, after all these decades, its design signature is so adaptable.

MILAN, Italy —  The coronavirus had barely begun to cast its grim shadow over Northern Italy when Angela Missoni showed her latest collection for the family brand, but there was already something profoundly strange in the air. “I would have said optimistic,” she said as she reflected on the clothes, “but it’s hard to get the word out of my mouth.” Still, she went on, “We have to work, we have to look to the future.”

The collection caught a mood: so linear and precise, and so restrained in its darker colour palette as to classify as almost severe in Missoni terms. Long before the virus emerged, fashion had been plagued by uncertainty, and there have been echoes in many collections of other equally uncertain times when it must have felt like the world was trembling on the brink of something.

The Roaring Twenties have been a favourite, for obvious reasons. Some designers went hellbent for glam. Others, like Angela, took a more muted, sober approach. Still, in a collection which emphasised an oversized silhouette for outerwear, Missoni showed huge-lapelled cocoon coats that would have served a flapper well. The emphasis on geometry — triangles, squares, diagonals – also felt very like Art Deco-tinged Jazz Age. So did the muted sparkle of lurex that was threaded through the knits for both men and women. Miles Davis was the presiding spirit for the menswear Missoni showed in January. Here, his presence was much ghostlier, but still tangible in that slight shine.

Once I had that Jazz Age edge lodged in my brain pan, the splendid geometric patchworks began to read as angular Art Deco cityscapes. It’s a testament to the Missoni magic that, after all these decades, its design signature is so adaptable. So, even as the shadows darkened, there were ample grounds for Angela’s optimism, however hesitant.