Angela Missoni was chasing sparkle and optimism, but a new seriousness has knit itself into the fabric of the house. 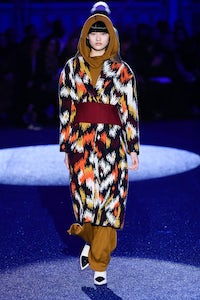 Angela Missoni was chasing sparkle and optimism, but a new seriousness has knit itself into the fabric of the house.

MILAN, Italy — “I want to have fun,” said Angela Missoni when she was pressed about the lurex-shot glitter of the new Missoni collection. It wasn’t quite that simple. The show also had a distinctly modest edge. Models walked with covered heads, swathed in shawls. Some sported knitted pierrot-like collars that covered the shoulders, and long gloves that covered bare arms. Match all of that to the noticeably global model casting and you had a different mood at Missoni. Angela was chasing sparkle, but a new seriousness had knit itself into the fabric of the house.

It deserved closer scrutiny than the cavernous venue and the peculiar lighting afforded the clothes. A preview in the Missoni studio hinted at a richness that wasn’t really communicated on the catwalk, particularly with a set of feathery patterns drawn from Missoni’s 80’s archives. Still, the takeaways from the collection shone through. In the womenswear, gorgeous, richly patterned knit coats. In the menswear, a new sartorial sophistication, sharper suits draped in soft, belted coats. In both cases, outerwear was clearly the story.

But there was always that lurex, and Angela’s insistence on good times. Who couldn’t relate to that, with the way the world is headed? The collection was optimistic in its emphasis on what the human hand is capable of. The craft was subtly obvious here in a collection that was knitted from stem to stern. That’s the glorious illusion of fashion!