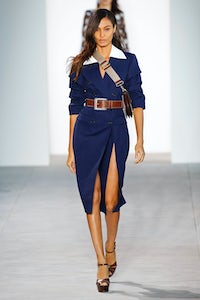 NEW YORK, United States — Michael Kors played Rufus Does Judy at Carnegie Hall in the studio the whole time he was fitting his Spring collection, so it made perfect sense that Mr Wainwright showed up at Mr Kors’s show today to perform a handful of Ms Garland’s classics, ending on the high note of Get Happy.

But — and maybe this impression was cued by the music — there was also a strong strand of old Hollywood: broad shoulders, belted jackets, a gingham coat cinched over matching skirt and blouse, a trench. “I sound like Bill Blass when I say this, but these women are dames,” Kors said. “Not like the English Dames Judy or Maggie. These women are flirty but they’re powerful. And they’re sly.”

There were a couple of looks — especially the monochrome of a white blouse and black pencil skirt, buttoning down the thigh, flaring at the hem, or Mica Arganaraz’s blinding white blazer belted over a sin-black wrap skirt — that could have stepped straight out of a film noir, classic playground of the dame. Preferably it would star Barbara Stanwyck, who Kors liked as a guardian angel for the collection. He even named a bag after her. He also mentioned Kim Basinger, exemplar of the modern dame in LA Confidential.

“Don’t most women want to release their inner dame?” he mused. Which made you wonder what the male equivalent might be, given that Kors had his men’s collection on the catwalk as usual.  “Inner goofball?” he suggested. “I like someone like Ryan Gosling who’s incredibly handsome but isn’t embarrassed by pratfalls.” That certainly worked for his slightly nerdy male models in their big glasses, with flapping shirttails messing up their dressing up.