Moschino’s Bonfire of the Vanities

​T​he décor of Jeremy Scott's​ set was in ruins, many of the outfits he paraded weren’t much better off, scorched, in some cases still smouldering​.​ 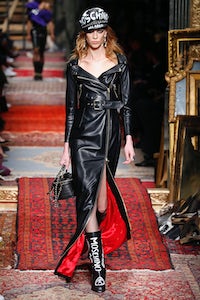 Moschino’s Bonfire of the Vanities

​T​he décor of Jeremy Scott's​ set was in ruins, many of the outfits he paraded weren’t much better off, scorched, in some cases still smouldering​.​

MILAN, Italy — On February 7, 1497, religious fanatics in Florence rose against what they saw as the excesses of the era and burned anything they considered luxury goods — books, art, fashion, musical instruments, cosmetics — in what came to be known as the Bonfire of the Vanities.

On February 24, 2016, Jeremy Scott staged his own bonfire of the vanities in the name of Franco Moschino. The décor of his set was in ruins, many of the outfits he paraded weren’t much better off, scorched, in some cases still smouldering, things that had been rescued from a fire, accessories included.

Scott talked about people who were as addicted to fashion as others are addicted to cigarettes. Maybe his show was a warning about the perils of cross-addiction. His accessories drolly reconfigured the paraphernalia of smoking. Fall asleep in your Moschino party frock with a cigarette in your hand and you would likely go up in smoke. Was this his version of tough love, to shake the addicts awake?

Or maybe Scott was making a broader point about the state of fashion. Every day, people in the industry are getting burned — by pressures of time and money, by intensifying competition, by shrinking attention spans. There’s a lava dome of dissent building. You could imagine Moschino himself, who fearlessly, cheerfully bit the hand that fed him, would be quite willing to sling a weighty metaphor.

Scott, on the other hand, wouldn’t be drawn. When Talking Heads’ Burning Down the House played at the finale, it was less battle cry than party track. Though he denied he was an addict, Scott is most definitely a cheerleader for Team Fashion.

So, if it was the second half of the show that was the crowdpleaser, with dresses that were just plain smokin’ — and one that was a full-on chandelier, kind of like Carol Burnett wearing the curtains in her Gone With the Wind spoof — it was probably the first part of the show that was truest to Scott the fashion dreamer.

To these eyes, it looked like he had dissected the essence of one of the most famous fashion photographs of all time: Peter Lindbergh’s 1991 shot of eight of the original supermodels dressed as Versace biker molls. Scott mutated the original Perfectos — artfully turning one into a skirt — and wrapped some of them up in great big satin bows, a fan’s gift to the industry he loves. 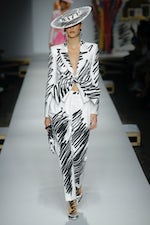 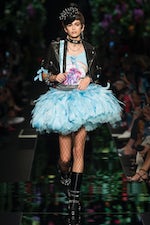 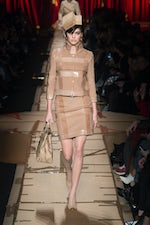 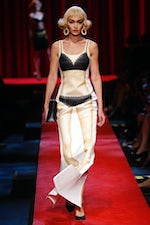