A tough girl mix of teenage dreams gave way to a floral finale, but the clothes tended towards costume more so than the designer's recent, sportier shows. 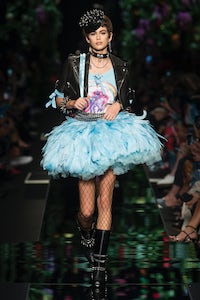 A tough girl mix of teenage dreams gave way to a floral finale, but the clothes tended towards costume more so than the designer's recent, sportier shows.

MILAN, Italy — Despite the expectations set by a backdrop festooned with verdant foliage and flowers, when Kaia Gerber minced out in a powder blue feathered tutu and a studded baker boy cap, Jeremy Scott’s audience sorta knew his latest Moschino outing would be one of wild contrasts. Her My Little Pony t-shirt (an official Hasbro collaboration) popped against a black leather perfecto and bondage choker. It was a tough girl mix of teenage dreams that Scott said spanned the life of a punk ballerina from the rehearsal room to her moment in the spotlight. Those tutus and perfectos kept coming — the former frothing in giant trains or trapped in leather corset belts, the latter cropped into tiny boleros or zipped and laced and strapped off the shoulders. The trope found new iterations when scrolled with gold sequins, beaded wings or draped in glazed silk bows, accenting the princess theme into saccharine sweet territory that played one cliché off another.

Save for the knit and jersey separates, these clothes tended towards costume more so than recent, sportier shows, even before Scott’s famed finale, which generally manifest the more spectacular inventions of the Moschino ateliers. Here it was a more dramatic shift than usual, but how else to sweeten all that punk parody than to say it with flowers?

The answer: Scott sent Anna Cleveland shuffling down the runway throwing silk ‘petals’ into the crowd from her upturned tulip gown – the first of eighteen flower and butterfly-shaped dresses that pushed his message of metamorphosis in the kitschy, faux-couture direction he so enjoys. Whilst Joan Smalls wore the prima ballerina’s red roses as a blossoming crimson skirt, a pair of nymphs (were they made of florist’s foam?) appeared engulfed in fake blooms carrying air freshener purses, and Vanessa Moody bounced along in a bubble of violet ostrich feathers swarming with butterflies. Backstage, Scott wryly quoted The Devil Wears Prada’s Miranda Priestley: “Florals for spring, groundbreaking!” Now how meta is that?