At MSGM, Massimo Giorgetti brought back the energy of the street, working around skateboarding references and the idea of slouchy, tomboy cool. 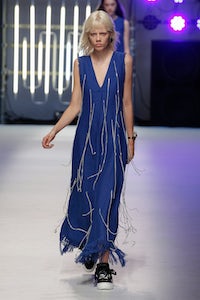 At MSGM, Massimo Giorgetti brought back the energy of the street, working around skateboarding references and the idea of slouchy, tomboy cool.

MILAN, Italy — Massimo Giorgetti, founder and creative director of MSGM, is refreshingly unassuming. Conceptual flourishes and outlandish references are not his thing. Rather, he focuses on product, presenting pieces as easy to wear as they are immediately understood.

Success, for Giorgetti, started with a sweatshirt. But in recent seasons, he seemed to have forgotten these origins, straying into strange, visually bold directions that were not always convincing. By contrast, todays show marked a swift comeback to the energy of the street. It worked to the designer's advantage. And, with its fast pace, garish colours and glorious soundtrack by Le Tigre, the show had an uplifting effect.

Nothing is the same the second time around, however. And, indeed, a lot has changed since Giorgetti's initial rise. The overtly pop, slightly postmodern, joyously mix 'n' match approach for which he was known has given way to a dry and powerful take on the contemporary urban wardrobe. Working around skateboarding references and the idea of slouchy tomboy cool, Giorgetti delivered some seriously mean Bermuda’s, wide extra-long trousers and light dusters, which made for spontaneous, easy looks. Chains added an element of punk, offset by perfectly contrasting but unnecessary bows.

It was all over in a second, but Dickies shorts and Etnies sneakers suddenly felt stylish and relevant again. 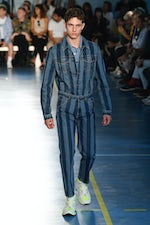 At MSGM, a Match Between Milan and Rimini 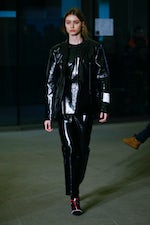 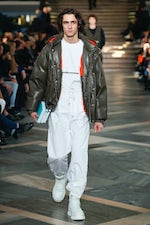 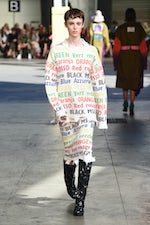