Johnny Coca's collection had more than a whiff of Vetements, though the bags were a knockout. 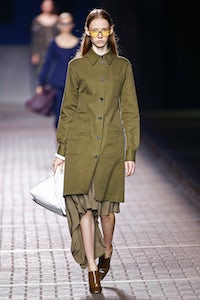 Johnny Coca's collection had more than a whiff of Vetements, though the bags were a knockout.

LONDON, United Kingdom — "Uniform without uniformity" is the catchy slogan creative director Johnny Coca used in the press notes to describe his second collection for Mulberry. He played with notions of convention and rebellion, mixing regimental stripes with pinstriped shirting, masculine tailoring with flounced asymmetries, severity with frilly frivolity. Sound familiar? That's because it is.

The collection had more than a whiff of Vetements — the oversize men's shirts and the dowdy dresses verged dangerously on plagiarism — which comes as no surprise given that uber-stylist Lotta Volkova worked on the show. This, of course, poses a lot of questions about the role of stylists in contemporary fashion and the cross-pollination of ideas they bring.

The core of the Mulberry business, however, is bags, and the styles Coca delivered, from satchels to boxy numbers, were a knockout.