The collection was a sharp, sophisticated consolidation of Barrett’s success, but its monochrome severity took its toll and the spectre of repetition reared its head. 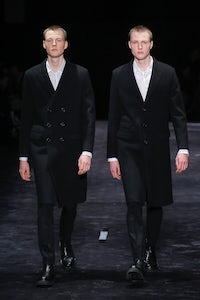 The collection was a sharp, sophisticated consolidation of Barrett’s success, but its monochrome severity took its toll and the spectre of repetition reared its head.

MILAN, Italy — This season, Neil Barrett’s ongoing analysis of menswear took him back to 1995, a moment he identified as transitioning from pattern and colour to something more minimal. He could claim responsibility for that. When he was at Prada, he launched the monochrome look on men’s fashion: matching suit, shirt and tie. His show on Saturday was an opportunity to remind his audience of that. And it wasn’t the only step back in time. One of Barrett’s more recent style signatures has been the hybridising of emblematic menswear pieces. Here, a jean jacket and a wool topcoat were co-joined.

Maybe the entire collection was a hybrid of a kind. Showing his men's and womenswear together has allowed Barrett to explore notions of gender, finding core similarities in the precision of military garb (the foundation of all men’s tailoring) and the cut of haute couture. An officer’s coat and an opera coat, together at last. The blend created interesting new silhouettes: military bomber jackets with a rounded cocoon back, coats with an emphatic wasp waist. Barrett barely reconfigures his menswear for his female clients. Here, those same substantial outerwear pieces were paired with lace slip dresses, bustiers, sinuous knits and sheer tops.

New for Barrett this season were motocross looks, particularly striking in midnight leather. “It was one of the things I was missing,” the designer claimed, and it was a welcome addition. The collection was a sharp, sophisticated consolidation of Barrett’s success and there was even a luxe plushness in a mohair blouson, a teddy coat and camo jacquard (the lush shagpile on which they were presented said so too) but the monochrome severity took its toll as the show wore on and repetition reared its head. That seems to be the ongoing challenge of Barrett’s career: how to take the tick-tock out of minimalism and add richness to rigour. Lord knows he has the chops for it.