The 'Crown Prince of Rigour' explores "the drama of womenswear," growing ever bolder with pattern and texture. 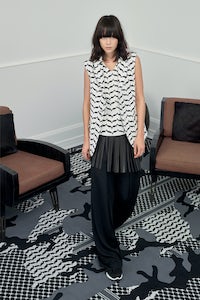 The 'Crown Prince of Rigour' explores "the drama of womenswear," growing ever bolder with pattern and texture.

PARIS, France — The men’s collection he showed in June marked the dawn of a new era for Neil Barrett. The sun rose still further with his womenswear for Spring 2016. Given the stringent linearity of his design signature, it’s been uplifting to see Barrett growing ever bolder with pattern and texture. It was another sign of confidence that he loosened the umbilical cord between his men’s and women’s collections.

Barrett never met a hybrid he didn’t like, but his combination of camouflage and keffiyeh was particularly smart. In fact, he liked this one so much he had it woven into an extravagant carpet that lined his presentation space. And then he also wove it in jacquard, printed it tone on tone, exploded it into pure abstraction, or shrank it to make the “potential future classics” he was talking about in June.

As well as being graphically striking, the new hybrid was provocative, and that seemed to give Barrett a push. Imagine a grass skirt rendered in black leather. Barrett did, as wraparound skirt/belts, which he layered over shorter skirts. Pleats turned into fringes. “You can be as covered or uncovered as you like,” Barrett said. “That’s the drama of womenswear.”

Dramatic, yes, but also as frivolous as a Jazz Age flapper, even if everything was in Barrett’s signature monochrome. And that's most definitely a new energy for Milan's Crown Prince of Rigour. 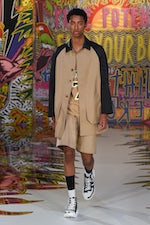 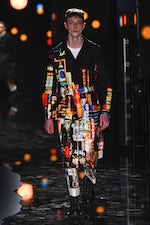 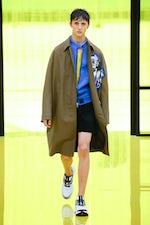 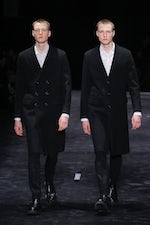