The designer brought a dictatorial edge that seemed particularly appropriate for harder times. 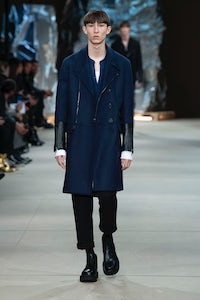 The designer brought a dictatorial edge that seemed particularly appropriate for harder times.

MILAN, Italy — “Untitled” is a significant title. Think of all the artists who deliberately label their work that way. I’ve just seen a retrospective of Cindy Sherman’s, every piece labelled “Untitled.” So it made sense for Neil Barrett to un-title his latest collection, given that it was a meditation on the relationship between fashion and art. They’ve become quite the woosome twosome: Raf Simons and Sterling Ruby, Kim Jones and Raymond Pettibon, Hedi Slimane and Christian Marclay, and, mere hours ago, Alessandro Sartori and Anne Patterson.

But Barrett was non-specific. OK, maybe the silver fox in the silk dressing gown under the black wool topcoat was his tip of the cap to famous pyjama-fan Julian Schnabel, but what Barrett’s illuminating shownotes were really keen to clarify was his equation of the act of dressing with the kind of creative exercise all artists engage in when they paint or sculpt or photograph or perform. Barrett emphasised the gallery-like nature of his show space with huge wrapped forms, like artworks packed for shipping. His soundtrack featured art-related voiceovers — “You drink coffee, you smoke cigarettes and you paint” — and Milanese graffiti artist Red, who walked in the show, contributed Basquiat-influenced graphics for sweats and tees.

Barrett’s love of uniform dressing might seem like a challenge to the convention of art as a vehicle for individual expression, but he was enthusiastic about the universality of his new collection. “Proposals for all!” he exulted. “From 15 to 70.” He did, however, admit that the age of his main customer bloc has recently shifted from 35-45 to 15-25. The new collection didn’t offer any reason why. It stayed true to Barrett’s hybrid of sharp tailoring, utility and sport. In fact, it re-animated one of his signature hybrids — a rain mac and leather biker — from 2003. And his puffa from 2000 was replayed in a dozen new shapes and sizes. So maybe the fanbase is simply down to a new wave of well-heeled Gen Zs. In which case, props to Barrett for riding that wave.

Obviously, he wanted to make it clear that he, now comfortably ensconced in his sixth decade, could still wear the same looks as the kids, a point underscored by his model casting. “A question of taste, not age,” he declared. Besides, his puffas and duffels and crombies and cableknits have the gravitas of modern classics. Maybe that’s something Gen Z responds to. With the almost military discipline of his clothes, Daddy Barrett is telling them how to dress. And this collection had a dictatorial edge that seemed particularly appropriate for harder times. It was really obvious in his womenswear. His tomboys usually copycat his men. Here, they looked like leaders, not followers, Joans of Arc for a new dystopia, puffa-ed up into don’t-fuck-with-me fierceness.